How can a baby robot seal be a medical device? 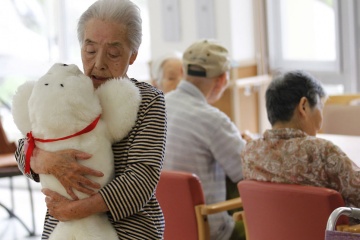 You won't find this plush seal on the shelves of your local toy store or among the Gund, Webkinz or Furbies scattered on the floor of a kid's room. Rather, you're most likely to find it this toy in residential care facilities, in nursing homes and in hospitals -- and its intended audience is the geriatric set.

Meet Paro, the harp seal pup that's actually a therapeutic robot used to comfort dementia patients and offer cognitive therapy for older adults. It may look like a stuffed animal, but it's not considered a toy. The U.S. Food and Drug Administration (FDA) considers Paro a Class II medical device, along with X-ray machines and powered wheelchairs. Class I, in comparison, includes items such as adhesive bandages and arm slings, whereas heart valves and metal hip joint replacements are considered Class III. But unlike an X-ray machine, this Class II device is plushy.

Paro is about the size of a newborn baby; it weighs just about 6 pounds (2.7 kilograms) and is about 22 inches (57 centimeters) long. It's covered in antimicrobial white fake fur, and it responds to human interaction with head movements, wiggling legs and trills similar to those of the baby harp seal it's designed to look like. But unlike a real animal such as a therapy dog, this therapy robot runs on batteries (and recharges through its own pacifier).

It's equipped with lightweight 32-bit RISC embedded processors and five types of embedded sensors that allow it to interact with humans. Light sensors give it light and dark awareness, and tactile sensors tell Paro when it's being touched. Audio sensors allow it to hear what you say, temperature sensors let it know if the room it's in is hot or cold, and posture sensors alert the robot to when it's being held. These sensors, in combination with artificial intelligence (AI) software, enable Paro to learn. It takes time and repetition, but this robot will learn its own name, and it will adapt its behavior based on its users' behaviors. For example, if you hug your robot seal -- which would be considered a positive, good behavior -- it will coo, and then encourage that behavior again. Conversely, if you throw or otherwise harm the robot pup, it will remember the interaction leading to that response and discourage the action.

What Animal-assisted Therapy and Robots Have in Common 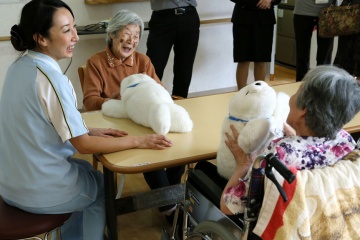 Interaction with Paro robots can be as effective as live-animal therapies for patients with cognitive disorders.
© Haruyoshi Yamaguchi/Corbis

In studies of human-robot interaction, Paro has been found to have a calming, anxiety-reducing effect on distressed elderly patients as well as a positive effect on social stimulation and communication. This is similar to how animal-assisted therapy has been associated with a reduction in pain (both physical and emotional) and improved healing (both body and mind). And that's no surprise; developed in 2003 by Japanese engineer Takanori Shibata at the National Institute of Advanced Industrial Science and Technology (AIST), Paro's based on the successes of using animals in therapeutic ways to help patients overcome both physical and mental health problems.

Animal-assisted therapy has been found to significantly improve both the mental and physical well-being of not only patients, but also their family members and caregivers. Petting and interacting with animals, it turns out, is more than just fun: It makes us feel good both emotionally and physically (it releases endorphins in our bodies, which naturally help lessen our pain), it lowers our stress levels (and our blood pressure) and it makes us feel a little less lonely. And this interaction also helps boost communication among patients and caregivers.

Paro is just as powerful as a live animal -- minus the vet bills and the pooper scooper. Interacting with the robot seal improves brain function in elderly patients experiencing declines in mental faculties and mood associated with mid to late stages of dementia, including Alzheimer's disease as well as other cognitive problems. Over time, interaction with Paro may not only prevent cognitive disorders from worsening, but also from developing. And just as studies have found to be true with live therapy animals, Paro has also proven to significantly lower both blood pressure and heart rate in elderly patients living in nursing homes -- both of which significantly increased after interactions with the therapeutic plush robot ended [source: Robinson].

The Power of Robots in Therapy 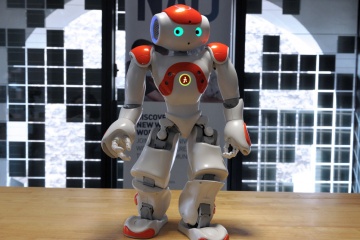 The NAO robot from Aldebaran Robotics is adorable, but it’s also one of Paro’s peers. Among its potential uses is in therapy for children with autism spectrum disorders.
© ERIC PIERMONT/AFP/Getty Images

The therapeutic effectiveness of Paro and other therapy robots is also still under review and results of long-term studies are still unknown, but evidence suggests robot therapy may be an alternative non-pharmacological option for elderly patients with dementia and mood disorders. Therapy robots may also help reduce the costs of long-term care for elderly patients living with dementia, although the use of toy-like robots instead of traditional pharmacological therapies is part of a larger ethical debate over the use of human-robot interaction as a form of unconventional therapy versus traditional caregiving.

Other types of therapy robots can be found in clinical environments, from those that are also plush -- like the soft toy that looks like an Easter Peep used to help overstimulated autistic kids to calm down (Keepon) -- to LEGO-built robots used to manage phobias (Phobot).

MIT-Manus is another example of a therapy robot; this one helps patients relearn basic motor skills after experiencing a stroke. And the data collected and stored on every patient who uses this type of robot can help clinicians evaluate their patients' overall improvement or decline more effectively.

In addition to the aforementioned Keepon, there are other therapy robots to help kids with autism, autism spectrum disorders (ASDs) or other developmental issues to grow, practice and improve their social skills. The NAO robot (which is pronounced "now"), for example, offers kids a safe and predictable interactions -- and the developers behind the 'bot have found that autistic kids are more responsive to the machine than they are to other humans. Social robots may also collect data helpful for clinicians to better diagnose autism, such as measuring eye gaze and facial expressions in young children.

Author's Note: How can a baby robot seal be a medical device?

It was way back in 1950 when Alan Turing considered, "Can machines think?" and officially sparked our artificial intelligence fantasies; several decades later, we've gone beyond debating whether or not Number Five is alive at the movies to actually interacting with the machines we've built. Fingers crossed these plushy therapeutic robots that are making a difference in our human lives today aren't the Cylons of tomorrow.

What makes us yawn?
Female Soccer Players Suffer Most Concussions Among High School Athletes
What constitutes a person's IQ?