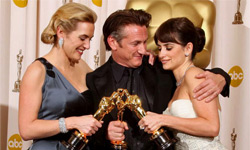 Winning an Oscar seems to have made Kate Winslet, Sean Penn and Penelope Cruz happy, but isn't there an easier way? See more pictures of emotion.
Jason Merritt/Getty Images

Are you happy? It's a simple question, but with numerous variables underlying it. What makes someone happy? Is there more than one route to happiness and more than one way to measure it?

If you're an economist or a social scientist, you may conduct scientific surveys that try to gauge levels of contentment or satisfaction. If you're a religious leader, you may wonder if someone feels spiritually fulfilled, connected to a community and in touch with his or her chosen deity. Being married often boosts happiness, as does a genetic basis for a sunnier disposition. Older women become less happy than their male counterparts, who report increased levels of happiness as they age [source: Holt].

In the end, happiness may come down to what you're looking for in life and how you define this nebulous term. In different societies throughout history, happiness has been equated with sheer luck or the certitude of religious belief. Others have thought that happiness means being a good person or being able to live a life of pleasure and leisure.

Just as definitions of happiness change, so too does our ability to handle adversity. Numerous tales exist of people undergoing tremendous hardships -- cancer, losing a job, a bad breakup -- and finding themselves in the end as happy as or happier than ever. Despite the difficulty in pinning down what happiness is and how to achieve it, we're going to take a stab at it in this article, in which we offer 10 key tips. We'll start with a few that might seem more obvious and then move on to some unusual recommendations for boosting happiness.