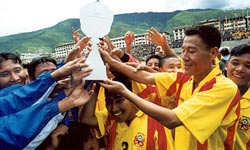 Bhutan is among the happiest countries in the world. Nobody knows exactly why, but if their 2002 soccer team is any indication, it's acceptance. Here, they smile after defeating Montserrat in the game for world's worst team.
AP Photo/Kike del Olmo

What is happiness? That depends on who you're asking.

A list of the happiest people on Earth varies depending on who puts the list together, what factors are considered and even from year to year. One thing doesn't change: The countries at the top of the happiest list are also some of the richest in the world. Coincidence? Not likely, according to Forbes Magazine. People living in rich countries seem to be more satisfied with their overall lifestyle. For example, in a survey conducted by Gallup World Poll, 82 percent of people from Denmark (which places first in most lists) described their lives as thriving [source: Forbes/Gallup]. Compare this to the last place on the list, the African nation of Togo, where only 1 percent of the people interviewed consider their life as thriving. Experts believe that countries that rank high in the scale, such as Finland, Sweden, Denmark and Norway, all offer their citizens complete coverage of their basic needs, including free education and health care.

One country that obviously seems out of place in the lists is Bhutan. This tiny Asian nation ranks eight in Business Week's list of the happiest places on Earth, despite having an illiteracy rate of 53 percent and a very low GPD per capita [source: Business Week]. So what makes Bhutan different? For one, it's largely unexploited, thanks to carefully controlled tourism and immigration. Bhutan is also highly spiritual, with the roots of Buddhism deeply embedded into the country's culture and everyday life.

Aside from moving to Bhutan, what can you do to ensure your own contentment? Read on to learn more ideas about how to pursue happiness in your life.