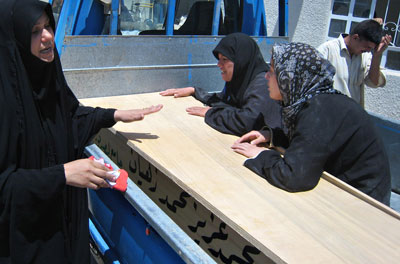 ­It's pretty safe to say that grief is one of those emotional bullets that's impossible to dodge. Animals such as dolphins and elephants grieve the loss of a pack member and recognize it via elaborate memorial rituals. Even small children are capable of grieving the loss of something as tiny as a goldfish. Unfortunately for the majority of us, grief becomes more common as we get older and have more life experiences.

Whether this intense sorrow is caused by the death of a loved one, divorce, loss of a pet, miscarriage or some other unfortunate occurrence, it's an emotion that varies in duration and intensity from person to person. In short, there is no easy way to "cure" grief. Instead, psychologists believe that the grieving process must be allowed to run its course over time.

­As defined by Merriam-Webster Online, the word "grief" means "deep and poignant distress caused by or as if by bereavement." The word dates back to somewhere between the 12th and 15th centuries (depending on which linguist you ask) and is rooted in such languages as Anglo-French (gref -- meaning injustice or calamity) and Vulgar Latin (grevis -- heavy or grievous). Despite the language barrier, all of these cultures seemed to hit the nail right on the head when they coined the term associated with feelings of sadness, confusion, despair, fear, anger, anxiety and guilt, to name a few. Grief also has a physical impact on those suffering from it. Often, bereaved individuals experience physical effects such as insomnia, irritability, fatigue, weight fluctuations and difficulty concentrating.

­This article will cover a range of grief-related topics. For example, we'll discuss the various types of grief, as well as the template five stages of grief. You'll also learn about additional ways that grief can affect a person, how to know when grief has spiraled out of control and the ways that psychologists recommend people work through sorrow.

On the next page, we'll start our look at the grieving process. 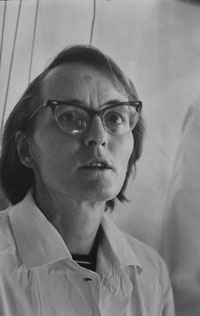 The intensity and duration of grief varies from person to person. Often, it depends upon the circumstances that caused the person to grieve. For example, the death of an elderly, although beloved, relative often elicits a different response than the death of a child. For children who never saw a divorce coming, it can be even more of a shock than to the child who witnessed daily parental arguments. Any way you cut it, grief isn't pretty. Several types of normal grief exist, including:

Anticipatory grief: This is the kind of grief experienced when the death of a loved one is just around the corner, such as in cases of terminal illness or an ailing, elderly family member. While painful, some psychologists believe this type of grief may help to shorten the post-death grief process because so many of the related emotions are worked through ahead of time.

Unanticipated grief: This type of grief is often associated with unexpected loss, such as from an accident, heart attack or other surprise event.

Ambiguous grief: This form is the result of a circumstance where there is little or no closure about the unfortunate event. For example, if a loved one is kidnapped and never found, a pet runs away, a parent abandons a child or a child abandons a parent.

Whichever type of grief a person experiences, the way he or she responds is directly related to several factors. For example, the closeness of the relationship between the deceased and the griever has an impact on the level and length of grief. Also, different people have different coping capabilities, so a more resilient person may bounce back more quickly than a more sensitive counterpart. Life experience also plays a role. Someone who has experienced loss more often than others may be able to draw on that previous experience to help that person manage grief more easily. Lastly, a solid support system is vital to the grief process. Those who experience loss but are surrounded by loved ones are more likely to recover in a healthier manner.

In an attempt to help bereaved people cope more effectively with grief, many psychologists have outlined "stages" of grief describing the typical emotions one can expect to experience. The first and perhaps best-known list of stages was developed by Dr. Elisabeth Kubler-Ross in her 1969 book "On Death and Dying." In it, she outlined the five stages that most people can expect to experience when dealing with a loss or facing a terminal illness.

Other psychologists have put forth variations on Kubler-Ross' stages of grief, although most of the time the framework remains very similar. The bottom line is that these stages are just an educated idea of how grief tends to play out, rather than a hard and fast rulebook. In short, if you skip a stage altogether, no one is going to make you go back and start at the beginning.

If these are the normal stages of grief, then what happens when the emotions get even stronger? On the next page, we'll find out.

Traditionally, rituals such as funerals and memorial services have helped bring closure to grief-stricken families and friends. Trends have lightened up considerably in recent years. In days past, widows were expected -- at their own social peril -- to don only black clothing for a year following the death of a spouse. After the anniversary passed they could wear only dark colors for the rest of their lives. In addition, mourners were forbidden to go to any sort of social gathering for many months and laughter was taboo. 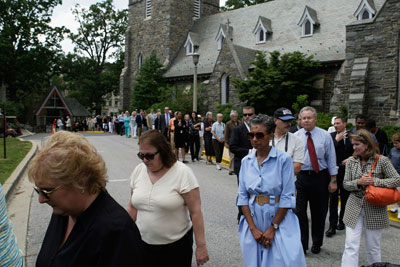 The general public lines up to pay tribute to the late television newsman Tim Russert in June 2008. Russert's unexpected death of a heart attack is the kind of traumatic death that may bring on complicated grief.
Alex Wong/Getty Images

In most cases, mourners pass through grief successfully, although the timetable varies significantly. In some cases, however, normal side effects associated with grief (the physical and emotional manifestations) can spiral out of control. Anyone experiencing or witnessing someone else experience the following symptoms for more than a couple of months should contact a professional for help: anxiety, sleeping problems, eating problems, abnormal social withdrawal, aggressive behavior, self-destructive attitudes, feelings of guilt or blame, or an inability to mention the deceased.

In recent years psychologists have begun to pay extra attention to the more severe manifestations of grief in an effort to tailor treatment plans specifically to the bereaved. In fact, the American Psychological Association (APA) estimates that 15 percent of bereaved people are at risk for developing "complicated grief." According to the APA, this form of grief is more severe than typical grief and is characterized by feelings of meaninglessness, changes in personal beliefs, exaggerated searching or yearning for the deceased, and marked shifts in personal relationships [source: APA].

Although little research has been published in this area, psychologists do believe that this type of extreme grief is more commonly associated with sudden and traumatic death situations or the death or loss of a child. Also, people who lose someone to whom they are extremely close and had a dependent relationship with are more likely to experience complicated grief. If left untreated, complicated grief can become a serious health threat to the individual. Some psychologists advocate a different type of counseling to help these patients through their grief. Rather than encouraging them to "let go" of their beloved, they should create and continue a lasting emotional bond with the deceased.

Similarly, psychologists also emphasize that normal grief is not considered a psychological disorder, as is depression. Professional help to treat possible depression should be sought if the bereaved experiences thoughts of suicide, preoccupation with death, severe feelings of guilt, decreased enjoyment in activities, inability to function or persisting feelings of worthlessness.

In some cases, traumatic situations can inhibit or block the grieving process altogether. This is most common when a person has lost a loved one suddenly, such as in cases of murder, heart attack or an accident. According to the National Institute for Trauma and Loss in Children, trauma and grief can be distinguished from each other by considering the following: Trauma feels unreal and terror is the most common resulting emotion, whereas grief feels real and is trademarked by sadness. Feelings of pain are common in grief, but trauma yields feelings of pain, helplessness and a fear of danger. Also, when grieving it's common to have dreams about the lost loved one; however, those suffering from trauma often have dreams where they themselves are in danger. If left untreated, trauma can become worse, whereas grief tends to run its course over time.

We'll look at some ways to work through grief on the next page.

There are few milestones as anticipated as the arrival of a baby. Unfortunately, roughly 15 to 20 percent of known pregnancies end in miscarriage, the spontaneous ending of a pregnancy, which happens for a variety of reasons (for more information, see How Miscarriage Works). Despite the fact that miscarriage is unsettlingly common, it's often a devastating experience for the would-be parents. In fact, miscarriage often results in substantial grief for at least several months. In severe cases, miscarriage can result in depression or post-traumatic stress disorder, which if left untreated, can seriously impact the bereaved parent's emotional health. 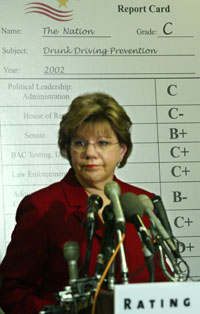 Without fail, the majority of professionals encourage grieving individuals not to grieve alone and avoid suppressing emotions. Generally, holding back feelings just prolongs the process and makes it more difficult to cope. Those with a close group of family and friends to help them through grief tend to go through the grief process more quickly and in a healthier manner. Since grief can manifest physically as well, it's important for bereaved individuals to take care of themselves by eating a balanced diet and getting plenty of exercise and sleep. Grieving individuals are also encouraged to avoid alcohol and drugs because they are depressants and can make the process much more difficult.

People going through the grieving process are also encouraged to channel their sadness in a constructive way, whether by writing in a journal, working on a scrapbook or creating a memorial in honor of the deceased. Many find solace in becoming involved in an organization that held a special meaning to the deceased. Notable organizations, such as Mothers Against Drunk Driving (M.A.D.D.) and the Susan G. Komen Breast Cancer Foundation were founded by people grieving the loss of a loved one.

Although the intensity of the grief tends to fade over time, it's important to remember that the sadness can reappear quickly during special times like holidays, anniversaries or significant life milestones. While grief may not ever be completely resolved, it often fades to the point where the person can be remembered with fond memories and laughter, rather than tears. The famous philosopher Friedrich Nietzsche penned a quote perfectly describing the end result of the trials and tribulations experienced during grief and other hardships: "That which does not kill us makes us stronger."

You'll find lots more information on grief and other emotional topics on the next page.

Dealing With the Loss of a Pet

The loss of a pet is often terribly difficult to accept and deal with, even for adults. This is due in large part to the fact that pets often provide their owners with unconditional love and very little back talk. The grieving process can be especially hard because others may not understand or sympathize with the loss because they consider the loved one in this circumstance to be "just a pet." Those who lose a pet are encouraged to work through their grief in much the same manner as someone who has endured a more socially "acceptable" loss. Psychologists even encourage memorial services as a way to find closure and make peace.