Is 'hangry' a real emotion? 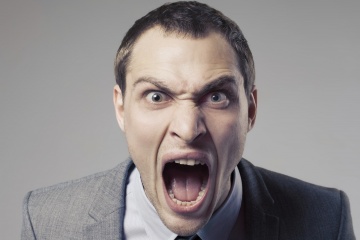 Feeling mad and low on blood sugar? You could be hangry!
yuriyzhuravov/iStock/Thinkstock

"John, why are you getting so mad?"

I looked at Charlie with daggers. "What?" I responded incredulously. "Why am I so mad?" I then spewed a river of vitriol punctuated by waves of invective and expletives. The incident occurred several years ago when I was a magazine editor. Charlie, my boss and the editor in chief, had called my art director and me to a meeting with the production manager at around 4 p.m. to discuss some missed deadlines.

Although it was early in the 21st century, our magazine group was as old school as old school could be. We never electronically sent files to the printer. Instead, a driver picked the files up and drove them to the print shop. The problem, it seems, was that the driver was waiting every Friday afternoon until we finished the issue. Apparently, the driver did not like waiting and complained to the production manager who complained to Charlie. During the inquisition, I cursed and lambasted the driver, the production manager and the archaic way we released the files.

Charlie didn't fire me. Yet, I left with shaking hands, clammy skin and a sinking feeling in the dungeon of my stomach. I didn't have lunch that day, and perhaps I should have. As it turns out, I was traveling through the hot-headed intersection where low blood sugar and anger meet. It's an honest-to-goodness condition called being hangry (a cross between hungry and angry). I call it, "you better shut your piehole when you're on an empty stomach and talking to your boss."

Many of us are familiar with the feelings that low blood sugar produces. Crankiness sets in. Some of us get abusive, others downright hostile. Usually a glass of juice, a candy bar or some other well-timed snack clears the condition. Still, why do people get hangry?

The source of energy on which your body depends
© 2014 HowStuffWorks

Some people have self-control, others do not. In recent years, scientists have linked self-control to nutrition. They say self-control requires energy. If your body is mining for energy and finds none, well, self-control goes out the window.

It all comes down to the amount of glucose our bodies process. The human body is a machine. Like all machines, it needs fuel. That fuel comes in the form of glucose, or blood sugar. Our bodies convert the carbohydrates in the foods we eat into glucose. The body then stores some of that glucose in the liver and muscles as glycogen. Some glucose is stored as fat.

When blood sugar is low, the hypothalamus, the portion of the brain involved in hormone production, among other things, gets bent out of shape, throwing the body's hormones out of whack and suppressing serotonin, a neurotransmitter. Serotonin has a hand in controlling mood and appetite. In fact, serotonin is often called the "feel good" neurotransmitter because it can relieve symptoms of depression and anxiety [source: Weaver].

If your body stops processing serotonin, your mood can shift. You can get tired or forget things. Your concentration becomes poor. You might even get angry. Still, your blood sugar has to drop like a rock (from 70-100 milligrams per deciliter to less than 55 milligrams per deciliter) for the Hanger Games to begin [source: Weaver]. 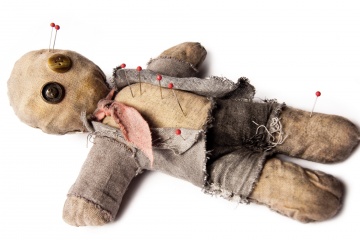 How many pins do you want to jab in that doll? Your answer could be tied to your glucose levels.
Fernando Gregory Milan/iStock/Thinkstock

An April 2014 study published in the journal PNAS confirmed that people really do get hangry. The researchers studied whether low glucose levels were responsible for greater aggression in married couples. The scientists studied 107 couples and monitored their glucose levels twice a day for 21 days. To measure their aggressive impulses, the researchers asked each person to stick between 0 and 51 pins into a voodoo doll representing their spouse. The angrier the person, the more pins they used [source: Bushman et al.].

When the three weeks were up, researchers asked each couple to play a "game" designed to measure aggression. The scientists allowed the winner of the game to blast the loser with loud noise as both sat in separate chambers. There was a catch, however. Each person wasn't really turning up the volume. Regardless, those participants with low glucose levels believed they were hammering their spouses with high decibels of irritating noise.

The Ohio State study was just one of several linking self-control to glucose levels in the brain. One study concluded that those who drank a beverage high in glucose were less aggressive than those who did not. Still another study found an indirect relationship between diabetes, which is marked by poor glucose metabolism, aggressiveness and decreased self-control. Although causation is always hard to pin down, these studies suggested that a spoonful of sugar helps diminish violent or aggressive behavior [source: DeWall et al.].

Looking back, I should have eaten a candy bar before the meeting with Charlie.

For the record, I apologized to Charlie the following Monday, but not the production manager. I explained to Charlie in a clear and calm manner the problems Rick and I faced as our deadlines approached. That meeting went well. I had a big breakfast an hour before.

Your First Memory Is Probably Fiction
Regrets, We’ve Had a Few — But Why?
Trouble Remembering? Tell Your Friends to Take a Hike