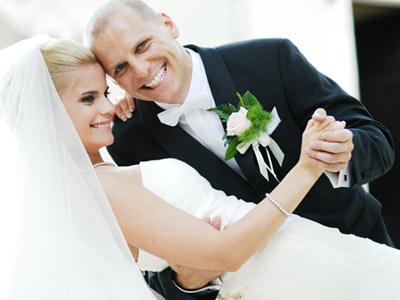 Sure, anyone can be happy when wedding cake is nearby, but what of all the days that follow?
© iStockphoto.com/Csondy

Comedian Henny Youngman made a successful career out of his one-liners about marriage and his wife. "I take my wife everywhere, but she keeps finding her way back," he quipped. "I miss my wife's cooking -- as often as I can," he said another time. He became famous for the line "Take my wife -- please!" While on stage, Youngman played the part of a long-suffering husband saddled with a particularly heavy ball and chain, but offstage, he was happily devoted to his wife of 58 years.

Clearly, Mrs. Youngman had a good sense of humor, a trait that many people say is important for a successful marriage. Others believe forgiveness, compromise and patience are the keys to success, while just as many people will throw around ideas like "Never go to bed angry." Some seek guidance from the church on their marriage, while others just turn on Oprah or Dr. Phil. We'd all like to know how to avoid becoming part of the staggering divorce rate.

Henny Youngman once said, "The secret to a happy marriage is still a secret." Each marriage is a unique situation, and no one set of rules will apply to everyone. A successful marriage in some ways is a series of negotiations and experiments designed to find the secret formula that will work for you and your spouse. While we can't give you the precise ingredients for your own happily ever after, we do have a few tricks that serve as a reliable foundation for any couple. 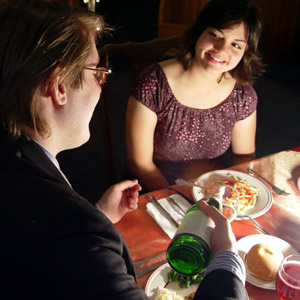 A candlelit dinner at home is an easy way to keep the romance alive.
© iStockphoto.com/sandoclr

The idea of trying to keep the romance alive may bring to mind awkward trips through the lingerie section or desperately lonely housewives answering the door in plastic wrap. However, keeping the romance alive can be as simple as remembering to pick up your wife's favorite cereal at the store or making the munchies for your husband's marathon football watching session without complaint.

In keeping the romance alive, you're attempting to remind your spouse that he or she is still worth the time and energy that you devoted at the beginning of your courtship. Chances are, when you began dating, there were lots of extra-long grooming sessions in an attempt to impress, special care paid to the activities of the evening and heartfelt concern about whether the other party was having a good time. While we're not saying that it's sustainable to maintain that kind of lifestyle, it's important to show that those feelings are still there, the feelings that make you want to check your breath twice before going in for a kiss. After all, no one likes to feel that they're taken for granted.

Romance can mean anything from romantic dinners to expensive jewelry to flowers presented for no reason at all. Even in rough economic times, though, there's no excuse to shirk on romance. Try leaving little love notes around the house, calling to say "I love you" in the middle of the day or even agreeing to simple favors like picking up the kids from school or leaving the toilet seat in the desired position. Your definition of romance can change as your relationship does, but it should always be part of the picture. 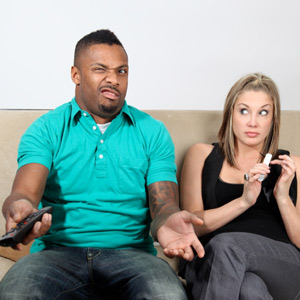 Don't settle for another night of bad television -- get out there and have some fun!
© iStockphoto.com/RushOnPhotography

In 2009, a study was published that had people running for their spouses' old yearbooks. Researchers found that people who frowned in old photos were five times more likely to get a divorce than people who had smiled for the birdie way back when [source: Moskowitz]. The study's researchers couldn't say definitively why the smilers had better luck in marital affairs, though there were theories that these people had more positive dispositions and were able to have a healthy, happy outlook on life.

Even if your yearbook photographer caught you unawares, it's never too late to start injecting your relationship with large doses of fun. Making time for fun helps keep the boredom with marriage at bay, and spending pleasurable time together with your spouse will only deepen your feelings of intimacy and trust.

While we'd all love fun to just happen spontaneously, it rarely does, so that's why we're saying you should make time for it. Get out those calendars and schedule a regular date night. That may seem near impossible for those with young kids or demanding jobs, but your kids will inevitably thank you for demonstrating a healthy, loving relationship, and if you're willing to work a few extra hours for a client you barely know, you should have a few hours to spare for a spouse.

Once date night's on the calendar, then you can start exploring your options. Maybe the two of you have always wanted to take up tennis; weekly lessons will help you develop a hobby you can share for years to come. Love eating out? Make an effort to explore new restaurants that you haven't been to before, so that it doesn't seem like a routine outing. If you can't afford the time and expense of a weekend away, treat your hometown like a tourist destination and spend some time taking in museums, exploring outdoor attractions and watching your local sports teams together. Don't like sports? Approach an activity that your spouse likes but you don't with a spirit of compromise. You'll get to spend quality time together, and you just might find a way to enjoy yourself. 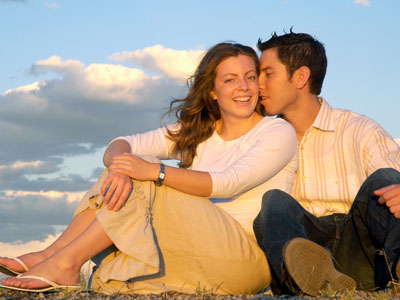 Shock Your Bad Habits Away
You Really Can Look Like Your Name, Research Says
10 Ways to Pursue Happiness