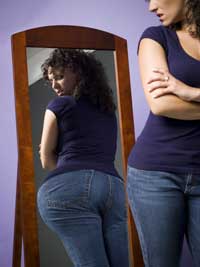 First, let's go over some typical behaviors of a person living with BDD and some of the actions they might take before seeking treatment. Keep in mind, these behaviors are usually compulsive, meaning that even though the person may want to stop, he or she simply must repeat the behaviors. Also, while the person may at first perform these behaviors or rituals in order to feel better, the urge to continue can intensify and become a source of even greater anxiety and unhappiness.

Common symptoms and signs of BDD may include:

As part of the condition, people with BDD might:

BDD can lead people to drop out of school or quit their jobs and become housebound. Some may even isolate themselves in a room and allow others to see them only when they are completely masked or veiled. Many people with BDD -- around 80 percent -- have considered suicide, and about 25 percent of people with the disorder have attempted suicide [source: Butler Hospital].

The disorder typically begins in adolescence. However, some people start to exhibit symptoms in childhood, and others may not develop the disorder until reaching adulthood. Researchers are exploring different avenues as they search for a direct cause of BDD, examining possible biological, psychological and environmental factors. So far, those efforts have not established a direct cause, and many in the field believe BDD's onset to be complex, with a number of possible contributing factors. Let's take a look at some of the possible factors in the next two pages.

Men with BDD tend to be sensitive about their skin, noses, thinning hair, genitals and overall body size. This condition is called muscle dysmorphia.

Muscle dysmorphia is a subtype of BDD and commonly leads men to excessive exercise and the use of dietary supplements and even anabolic steroids to increase their overall shape and musculature. ­­