Browse the article Is the human brain still evolving? 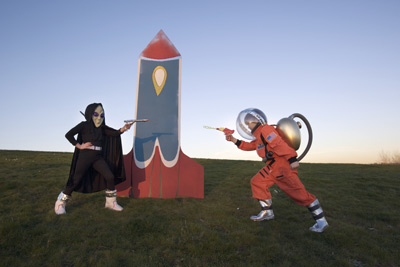 Brain Image Gallery What will we look like in the future? See more brain pictures.
Spike Mafford/UpperCut Images/Getty Images

When we daydream about the future, we tend to focus on the fabulous belongings we're going to have. Jet packs, flying cars, weapons to kill aliens, cell phones that make today's sleek models look clunky -- you name it, we're going to have it. We don't tend to focus, however, on who we'll be in the future. Most of us probably picture ourselves exactly the same, though maybe thinner, as surely we'll all have robot personal trainers by then. While we see the world's technology evolving to meet our needs, we may not think about how we ourselves might be evolving.­

­The story of evolution up to this point explains how we became the upright walking, tool-using homo sapiens of today. The turning point of this story so far concerns cranial expansion. About 2.5 million years ago, hominids started out with a brain weighing approximately 400-450 grams (approximately 1 pound), but around 200,000 to 400,000 years ago, our brains became much bigger than those of other primates [source: Kouprina et al.]. Now, we humans walk around with brains tipping the scales at 1350 to 1450 grams (approximately 3 pounds) [source: Kouprina et al.].

­As humans, we enjoy a much larger neocortex. This area of the brain is the key ingredient that separates us from other species -- it allows us to do our deep thinking, make decisions and form judgments. And while our brain has served us well so far, it certainly has a few defects we wouldn't mind eliminating, like disease, depression and the tendency to make drunken phone calls at 2 a.m. to an ex-boyfriend. But until recently, scientists thought that we were done evolving, that we had reached a sort of evolutional apex. Now, though, some researchers think that we're not quite done.

Could our brains be evolving right now? Could we gain the intelligence to make our dreams of the future come true, or will we return to the hominid state of yesteryear? Go to the next page to find out if brain evolution is possible. 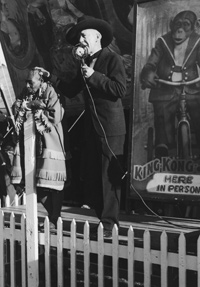 In the 1950s, someone with microcephaly might have been a circus attraction, but today, this condition provides insight into human brain evolution.
FPG/Hulton Archive/Getty Images

One way to determine if brain evolution is in our future is to consider how our brain evolved in the past. Since scientists don't know exactly how we ended up with brains bigger than other primates, they're left looking at examples of when the brain doesn't grow to the expected size. One such condition is microcephaly, a disorder in which the brain is much smaller than normal; researchers believe that the size of a microcephalic brain is roughly similar to that of an early hominid [source: Kouprina et al.].

Microcephaly has been tied to at least two genes: ASPM and microcephalin. When mutations in these genes occur, brain size is affected. Since ASPM seems to have evolved faster in apes than in creatures such as mice, it's possible that it may have something to do with how our brains evolved. A 2004 study that compared ASPM in humans to other primates found that the sequence of the gene was roughly similar, which seems to suggest that ASPM alone wasn't responsible for differentiating humans from chimps [source: Kouprina et al.]. But ASPM could have facilitated something else in the human brain that caused our noggins to expand so dramatically.

The following year, a study led by Dr. Bruce Lahn of the University of Chicago continued tracking the presence of ASPM, as well as microcephalin, in human populations. But Lahn had noticed that these genes were changing slightly; these alternative forms of a gene are known as alleles. Lahn's group tracked the alleles in the DNA of several populations, including individuals from Europe, Africa, the Middle East and East Asia, to ensure diversity.

In the case of ASPM, a new allele emerged approximately 5,800 years ago, and is now present in about 50 percent of the populations of the Middle East and Europe [source: Wade]. It's found to a much lesser extent in the peoples of East Asia and Africa. The allele associated with microcephalin is believed to have developed about 37,000 years ago; about 70 percent of the European and East Asian populations exhibited this allele [source: Wade]. Lahn's team deemed the variations common enough to suggest that their presence was evidence of natural selection as opposed to an accidental mutation, suggesting that the brain may still be evolving [source: Associated Press].

Lahn's hypothesis that these genes have evolved as they conferred advantages to the brain comes with the same caveat as the earlier study. Scientists simply aren't sure what role ASPM plays in brain size, and it's a given that not all of the brain-size determining genes have been identified yet. African populations, who didn't appear to be carrying either gene in great frequencies, may have other genes at work on their brains, while it may turn out that ASPM and microcephalin have persisted in the other populations for some reason completely unrelated to the brain.

More work is needed on the role of ASPM, microcephalin and other genes involved in the growth of our brain, but one reason why scientists are so interested in brain size is that it has been linked with intelligence. Bigger brains might portend bigger IQs. So if the ASPM and microcephalin alleles are in fact causing our brains to evolve, what are the possible destinations? Will we be bigger-brained and smart enough to realize some amazing inventions? Or is mankind on a slippery slope down to Stupidtown? On the next page, we'll investigate what the fallout of all this evolution might be. 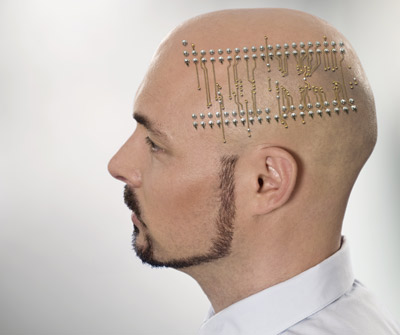 So if it turns out that the alleles in ASPM and microcephalin are causing our brains to evolve, what might the outcome be? We might like to think that there's nothing but bigger and better things ahead of us, but British researchers have claimed that our brain is already operating at maximum capacity. After creating models of how our brain works now, it seems that we've reached our maximum ability to process information, or we're probably within 20 percent of that number [source: Ward]. If our brain did get bigger, other organs would have to grow as well, particularly the heart, which would have to work harder to power a bigger brain.

The researchers also found that we're facing a bit of a vicious circle in terms of increased intelligence. For the brain to take in more information, the connections between brain cells would have to become wider, so as to speed up the rate of the brain's information superhighway. But to support that, we'd need more insulation for those connections, as well as more blood flow to the brain to support the connections. That, in turn, leaves less room for the expanded connections. And if the brain became bigger, the messages would only have farther to go, slowing down our already efficient processing times [source: Ward]. Other research suggests that the metabolic demands necessary for evolution mirror genetic changes that occur in schizophrenia, perhaps indicating that neurological disorders accompany brain evolution [source: BioMed Central].

But no one wants to imagine a future in which we become dumber, right? That means the next step for our brains may not be a natural evolution so much as a genetic engineering to ensure that our brains are the best possible brains they can be. Think of how our society already relies on antidepressants and other drugs to correct brain malfunctions. Eventually, we may be able to engineer defects out of existence.

And if we wanted to improve our intelligence? Some are starting to stay that if we want to do that, we may have to form an alliance with computers. Roboticists at Carnegie Mellon University estimated that computers will surpass our processing capacity by 2030 [source: Lavelle]. After we exhaust genetic engineering mechanism to improve our brains, we may have to supplement our minds with a computer interface. A futurist named Ian Pearson has considered how an evolution with the aid of computer parts might proceed.

First, Pearson suggests, we'd become a species called Homo cyberneticus, a human species that's slightly assisted by some silicon enhancements. As this species proves successful, we'd use the practice more, to the point where our "brain" was entirely computer-based. This species would be known as Homo hybridus, as it would have a body similar to ours. But Pearson foresees one major flaw with Homo hybridus -- eventually, the organic parts of the individual would wear out and die. This will lead to the rise of Homo machinus; this species will be made entirely out of silicon and will essentially have immortality. The brain will be able to back itself up, and parts will be repaired or replaced.

The thought of Homo machinus may make you uncomfortable, particularly if you've seen a little film called "The Terminator." But you can already sense how our reliance on computers is growing; consider, for example, a job applicant who shows up without basic computer skills. That candidate likely doesn't stand a chance against applicants who could whip up PowerPoint presentations or Excel spreadsheets in their dreams. Similarly, humans that try to opt out of machine-based parts may find themselves unable to compete successfully with the new species.

And sure, there will probably be things we'll lose forever in this transition, some attributes that those computer brains can never have, like creativity. But really, one could argue that with the glut of reality shows that are already on the air, creativity may already have died.

So yes, the human brain could evolve and change. The question is, will we still be humans after it happens?