Could a brain scan tell you if you're going to become a criminal?

Browse the article Could a brain scan tell you if you're going to become a criminal? 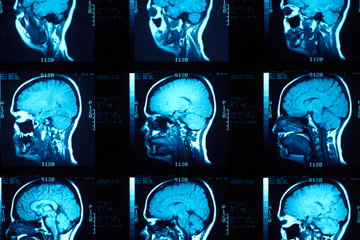 A brain scan could tell you if a person has a predisposition to a lack of empathy, but it won't tell you if they're a criminal.
John Greim/LightRocket via Getty Images

Wouldn't it be terribly convenient to simply scan the population to find out who was a criminal or not? We'd just scan everyone's brain for violent or psychopathic thoughts and then proceed accordingly. Those who pass can continue being valuable members of society. Those who don't: Prison? We'll decide that later.

But let's hold our pitchforks and torches and look at what we already know about the brains of violent criminals and psychopaths.

For one, some studies have shown that a psychopath's brain sees emotions differently than other folks. One study showed that when "normal" people viewed photos of fearful faces, blood flow increased to a part of the brain that processes facial emotion. Those with psychopathy didn't show the same increase, which gives some evidence to the idea that there is a biological basis for psychopathy [source: Deeley et al.]. Likewise, scans of the brains of murderers have shown a decrease in the development of the prefrontal cortex, which can result in a host of behavioral issues: less control over emotions, less impulse control and less risk aversion [source: Adams]. Biology wins?

Hardly. Because even if we've seen that some brain function or development is different in violent and psychopathic people, that doesn't mean that there aren't environmental factors that make someone act on violent or deceitful urges. Instead, we've learned that social and environmental factors can change the brain and perhaps even how our genes are expressed [source: Adams].

The bottom line is necessarily convoluted: A brain scan might be able to tell you if a person has a predisposition to a lack of empathy or increased risk-taking. But that doesn't indicate that he or she is, in fact, a criminal — and it certainly doesn't give you solid evidence that they might act with violence or psychopathy someday. Then again, it also doesn't give you proof that they won't.