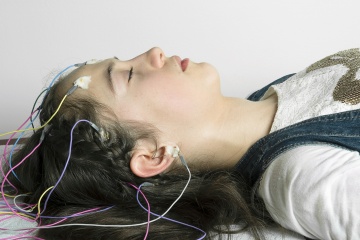 The brain is an incredible processor, but is it possible to overload it?
minemero/Thinkstock

In the average, healthy individual, the brain is an incredible piece of machinery capable of keeping the heart pumping, performing complex mental tasks and even allowing you to walk and chew gum, all at the same time. To a large degree, the brain is able to avoid traffic jams and keep all of these things happening at once with ease. To avoid interference between different parts of the brain, various regions operate on different frequencies.

For example, your hippocampus sends signals at around 5 hertz, while brain areas related to movement operate at 32 to 45 hertz [source: Hipp et al]. Think of it like the layers on an exit ramp. Signals sent at one frequency might travel on a different layer than those at another frequency, so these signals can avoid collision. These frequency differences allow different parts of the brain to operate all at once without interrupting one another or misinterpreting signals meant for other brain areas.

Despite this high level of sophistication, it's not a perfect system. After all, there has to be one mechanism responsible for initiating all those signals before they can travel through the brain. Some scientists refer to this mechanism as a "router" of sorts, which takes in information and sends signals throughout the brain. These signals don't bump into others thanks to frequency differences, but the router itself can suffer from overload if it receives signals too close together [source: Zylberberg et al].

Right after a signal is received, the brain experiences a refractory period where it needs to reset itself in order to receive and process the next signal. If information is received during this refractory period, it can be missed or misprocessed because the brain's router is otherwise occupied.

The brain can also experience miniature traffic jams thanks to blockages along the paths that neurons take as they carry signals through the brain. Researchers discovered that fruit flies experience small, benign blockages on these neural pathways, which block brain signals, causing a traffic jam that can last for up to 30 seconds [source: Iacobucci et al]. Most of the time, these road blocks go away on their own, but some can remain permanently, interfering with communication between different parts of the brain. Further research on these traffic jams may help scientists treat serious neurological conditions, such as Alzheimer's [source: Nealon].

Is the human brain still evolving?
Why Do People Lie About Things That Are Easily Disproved?
Can pets make you happy?