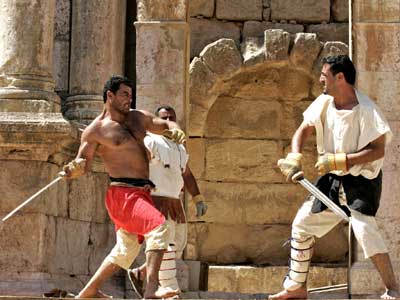 Both of these men brandish their swords in their right hands, as 90 percent of the human population would. The left-handed soldier, therefore, is something even another lefty wouldn't be as well prepared for.
­AP Photo/Nader Daoud

­Unlike snails, crabs and fish, humans thrive at the top of the food chain. Yet while they don't have to worry about predators, they've long had much to fear from their fellow man.

Whether biting and eye gouging in the dust of prehistory or crossing rapiers on a fine Victorian lawn, violence has always played a role in human society. The better practiced you were at crushing your opponent in hand-to-hand combat, the better you were at life.

Just as a predator adapts to kill the majority of its prey, so too a soldier trains to defeat the most common opponent: the right-handed fighter. Often this was merely an accident of experience -- patterns of repetition worn into the human mind. If you fought mostly righties and survived, your skills and reflexes would revolve around a right-handed opponent. Therefore, left-handed warriors enjoyed an element of surprise over their opponents. In bloodier times, skilled lefties were often able to cut their way to the top of tribe. In fact, arguably the most brilliant general of all time, Alexander the Great, was reportedly left-handed.

Between 2001 and 2004, a pair of French researchers tested the theory of lefty battle superiority by examining the prevalence of left-handed citizens in areas with high murder rates. In theory, these conditions would allow them a better chance to observe, at least statistically, the lefty survival of the fittest. Sure enough, researchers Charlotte Faurie and Michel Raymond discovered lefty population percentages as high as 27 percent in violent corners of the world.

In areas where murder isn't a part of daily life, however, we always have sports to fall back on. The same principles that allow lefties to thrive amid violence allow them to excel in games where one competitor's skills and reflexes are pitted directly against another's. Just as a Roman gladiator trained to battle right-handed opponents, a baseball player boasts more experience against right-handed pitchers. With more combative sports, such as boxing, wrestling and mixed martial arts, the comparison is even more obvious. In fact, if a boxer knows that an upcoming opponent is left-handed, he or she will train against another lefty in preparation for it.

In contests where the slightest advantage can make all the difference, southpaws often wind up with their hands raised in victory. If the percentage of left-handedness were to rise, however, the advantage would slip away proportionally.

Explore the links below to learn more about left-handedness and athletic advantages.