Can you lose weight faster if someone pays you to do it? 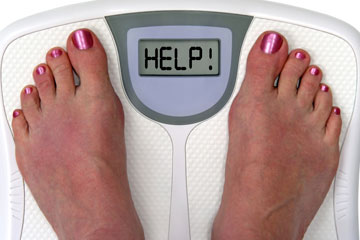 For many people hoping to shed extra weight, it can be difficult to stay on track. Money may be just the motivator they need.
©iStockphoto.com/Amy Walters

Heads up, American adults -- chances are good you're overweight. Maybe even obese.

More than one-third of American adults are considered obese -- that means that more than 60 million people in the U.S. have a body mass index (BMI) greater than 30. And more are considered overweight; about 58 million adults have a BMI that falls between 25 and 29.9. While there is debate about using BMI to quantify health, the simplicity of the formula (kilograms divided by height in meters squared) makes it a quick way to place people on numerical spectrum for general assessment.

It's not only a love of fast food that's weighing the U.S. down (more than $190 billion is spent at American drive-thrus every year), it's also a lack of exercise -- although the fries aren't helping. Twenty-five percent of American adults lead completely sedentary lifestyles; and even if you're among those who are active, more than three-quarters still don't meet the minimum recommended daily exercise goals (that's 30 minutes of moderate physical activity, five days every week, plus strength training exercises twice a week) [sources: Get America Fit Foundation, CDC]. We're falling short, not necessarily on our desire to lose weight -- it's one of the most common New Year resolutions -- but on our motivation to do so.

Experts tell us that when we're readying to make healthy lifestyle changes, it's important to set a realistic goal, commit to that goal, and stay motivated about reaching that goal. They don't usually recommend adding a financial incentive as motivation to get the job done, but could it help? Growing evidence suggests it just might.

When it comes to self-motivated weight-loss plans, it's reasonable for most adults (not everyone, so always talk to your doctor first) to try to lose one pound – or about half a kilogram) per week over a period of six months. But studies have found that people who participate in a structured weight-loss program, rather than on their own, are more successful, losing an average of 18 to 20 pounds over a six-month period -- but not just any weight loss program will work. Successful behavioral weight-loss programs don't just reduce the number of calories eaten and increase activity level, they also have regularly occurring group meetings with weight-loss peers and professionals, as well as daily and weekly goals to meet.

While the only equation to losing weight is to burn more calories than you eat, there are tricks that might help -- and sometimes, that might mean betting on yourself (or betting against yourself -- whichever works).

Financial and other rewards in behavior modification programs aren't new. And as it turns out, money works in the weight game.

According to recent research from the Mayo Clinic, a little competition in the form of a healthy wager can lead to greater success in diet and exercise efforts than when money isn't on the line, although the weight may not necessarily come off faster. During the 12-month Mayo Clinic study, obese participants who were paid to meet weekly weight-loss goals and to attend regular counseling sessions lost four times more weight than participants who were not given financial incentives [source: Nainggolan]. Another recent study, this one published in the Journal of the American Medical Association, found that obese Americans given financial incentives to lose weight were five times more likely to meet their weight-loss goal than their peers without the money motivation [source: Sayre].

Financial incentives -- and disincentives -- motivate people when they're immediate, and ultimately because we want the payoff more than we want to snack. But what happens when we're off a weight-loss plan, maintaining weight rather than losing it? Participants in a 32-week study were, like in the Mayo Clinic study, more successful meeting their one-pound-per-week weight-loss goal and keeping that weight off for eight weeks when given financial incentives, losing more weight than participants who were not given financial incentives. After the weight-loss program ended, though, so did their motivation to maintain the weight loss, and those who'd lost weight in the study gained back pounds [source: John].

Financial incentives for weight loss are gaining popularity in the real world, not just in studies. Looking to bet you'll lose 10 pounds in the next months? Sites such as HealthyWage and DietBet, among others, allow users to wager their own cash against meeting their weight goals and participate in challenges and other reward-based programs. Your employer may also have incentive programs, betting that you will change your bad habits based on the rewards they offer -- as many as, if not more than, two-thirds of employers offer some sort of employer-sponsored incentive-based wellness programs [source: Scherzer]. These programs include everything from cash rewards and gift cards to health insurance discounts and other perks to encourage employees to maintain a healthy BMI (as well as meeting other health goals such as quitting smoking).

How Many Calories Are In One Pound?

One pound of fat on your body equals 3,500 calories. Create a 500 calorie deficit every day of the week and you can expect to lose about one pound per week [source: Mayo Clinic]. 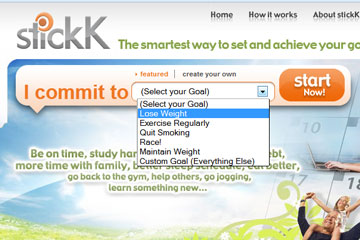 Web sites like stickK (pictured here), Healthy Wage and DietBet enable users to commit to personal challenges that pay off if the goal is met.
Screen capture by HowStuffWorks staff

Sometimes, spending money to motivate people to lose weight and stay healthy actually costs less than the medical expenses associated with obesity-related illnesses. For example, the Centers for Disease Control and Prevention (CDC) estimate that in 2008 alone the health costs for a person with a BMI greater than 30 were $1,429 higher than a peer with a normal BMI (between 18.5 and 24.9) -- that's nearly $150 billion spent treating obesity-related conditions [source: CDC]. That's a lot more than we wager on our own weight loss.

Obesity is the second leading cause of preventable deaths in the U.S. (the number one cause of preventable deaths is tobacco smoking) [source: Get America Fit Foundation, National Cancer Institute]. Cardiovascular disease, high blood pressure (hypertension) and stroke are all obesity-related problems, as are type II diabetes, sleep apnea, gallbladder disease and certain cancers (including breast cancer and colon cancer). Eighty percent of type II diabetes cases are obesity-related, for example, and treating Americans with type II diabetes costs nearly $64 billion annually [source: Get America Fit Foundation]. Getting Americans to wager on their own weight loss not only has the potential to reduce waistlines but healthcare costs as well.

Participation in a structured weight-loss program is shown to help us lose those extra pounds, especially if that program offers financial rewards for losing pounds. Programs vary, and some are set up to reward you with cash prizes. Others are set up for you to bet your own money on your own weight loss. Some pool prize money in a lottery. And some are a combination of your own contributions matched with cash prizes given for meeting your wellness goals. All participants (whether gaining, losing or plateaued) in incentive programs with their own cash on the line still bet on their weight loss; in fact, more than 50 percent of participants who are not meeting their goals still make contributions to their deposit contracts -- consider it wishful thinking or wishful wagering, but if weight isn't lost, money isn't paid out [source: John].

Author's Note: Can you lose weight faster if someone pays you to do it?

Researching this article, I learned that losing just 5 to 10 percent of your body weight can decrease your risk of developing obesity-related illnesses; for example, it's estimated that nearly 800,000 Californians could avoid developing type II diabetes by losing just 5 percent of their current weight. While we won't all win $250,000 like Danni Allen, for instance, who lost 121 pounds and won season 14 of "The Biggest Loser," it can pay to try weight-loss incentives -- just beware of weight gain once the rewards go away.

How Electroconvulsive Therapy Works
Which Countries Have the Smallest Personal Space?
Why Do People Usually Walk In the Same Direction?