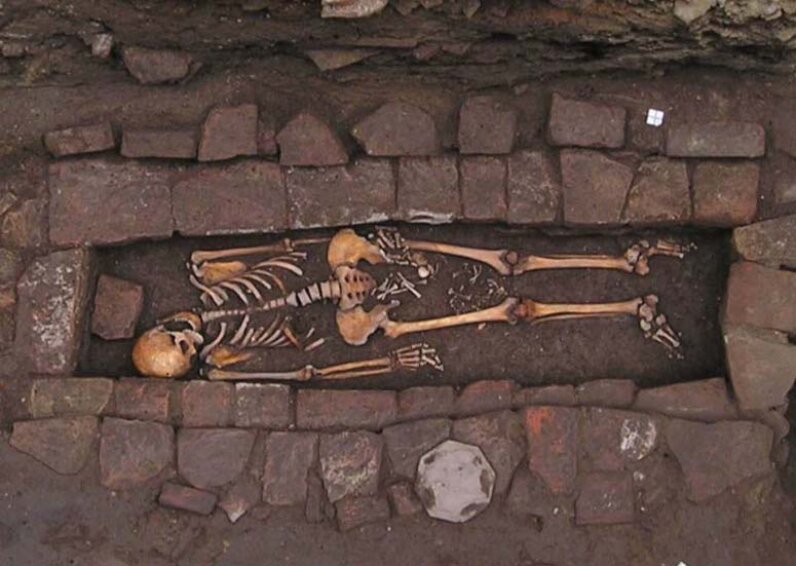 The skeleton of a woman from mid-7th century Italy found with fetal remains from a posthumous birth. Scientists now believe the hole in her skull was from surgery, probably performed to treat eclampsia just days before she died. HowStuffWorks/YouTube Screen Capture

It's really too bad about the Middle Ages. They were doing the best they could, bless them, but sometimes you hear about the medical procedures people had to endure back then, and... well, it's awful. Whatever medical dramas we go through today, we should occasionally take a moment to remember the people who died because they lived in a time when cutting-edge science prescribed drilling a hole in a woman's head to treat a common, if serious, pregnancy-related illness.

In 2010, archaeologists working in the medieval city of Imola, Italy uncovered a coffin dating back to the 7th or 8th century. It contained the remains of a woman who had evidently given birth to her baby posthumously, as evidenced by a pile of tiny bones lying between her legs in the coffin. Moreover, the woman's skull had a small hole drilled into it, surrounded by scratch marks. She seemed to have been intentionally and properly buried, and the grave showed no signs of being tampered with over the intervening centuries.

Obviously, the archaeologists who found this horrifying treasure trove were jazzed out of their minds because not only is this a rare example of "post-mortem fetal extrusion," or "coffin birth," the hole in the woman's skull shows that she underwent a very primitive form of brain surgery called trepanation about a week before she died. Very few archaeological examples of this procedure exist from Italy in the early Middle Ages. It's appalling, but quite the find.

Researchers have spent the past few years piecing together the evidence of what happened to this woman 1,300 years ago, and think they have an answer to what precipitated this very strange scene. The results of their investigation have been published in the May, 2018 issue of the journal World Neurosurgery.

The "coffin birth" is easy enough to explain: The woman and her gestating baby died just a couple weeks before her pregnancy reached full term. She was buried, and a few days after her death, gases produced by the decomposition of her body built up in her abdomen and eventually forced the fetus through her vaginal canal.

But what about the hole in her head? According to the authors, it was most likely the product of a doctor's very earnest attempt to try to save this woman from a pregnancy-related illness. Trepanation is a form of brain surgery that dates back to Neolithic times and involves drilling or scraping a hole into the patient's skull. This woman evidently underwent trepanation very late in her pregnancy, probably in order to relieve cranial pressure brought on by eclampsia, or dangerously high blood pressure that can be fatal for both mother and baby. Trepanation was often performed on people to ease high fever, convulsions or cranial pressure, all of which are symptoms of eclampsia.

Now That's Interesting
Trepanation is thought to be one of the world's oldest surgeries, and trepanned skulls have been found dating back to the Paleolithic Era.