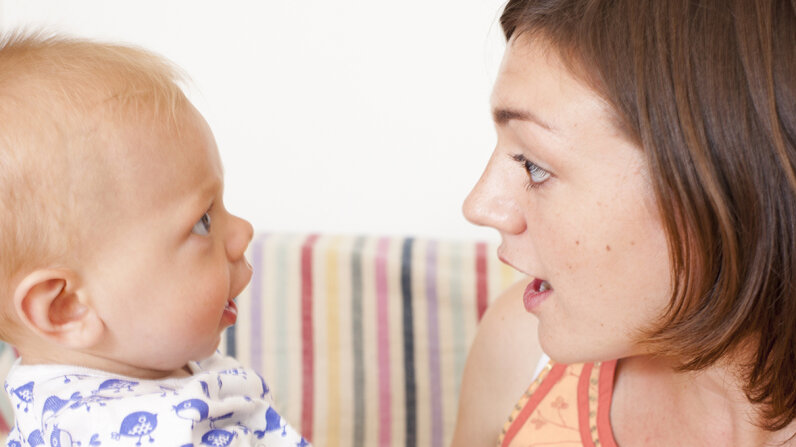 Are there strategies for a baby from a monolingual family to more easily pick up a second language outside the home? Researchers think they've identified one method. Cultura-RM/Nancy Honey/Getty Images

For a long time, we've been hearing that babies who grow up in a home where parents speak two languages are able to learn both of them almost effortlessly, and in the process improve their problem-solving and other cognitive abilities.

That might make it seem like tough news for kids who have two monolingual parents who can't afford a nanny who speaks a different language to continually expose the child to it. Scientists who study early development and language have long known the best way for babies to learn languages is through repeated early exposure, which is most likely to happen at home. But in a newly published research article in the journal Mind, Brain and Education, researchers at the University of Washington's Institute of Learning and Brain Sciences (I-LABS) outline a method for infants to learn a second language — and to do so outside the home.

The researchers developed a play-based intensive English-language curriculum, which they tested out on children in public preschool centers in Spain. But the approach, as described in a university press release announcing the findings, is an unorthodox one. It uses what the researchers call "infant-directed speech" or "parentese" — the exaggerated, sing-song style of talking that parents use to talk to babies (and puppies, and kittens). Parentese features a simplified version of English grammar, higher and exaggerated vocal pitch, and drawn-out vowels.

University of Washington student Jinnie Yi works with a toddler at one of the infant education centers in Madrid participating in the new study.
I-LABS

In the study, children from the ages of 7 to 33.5 months received one hour of English-language learning each day for 18 weeks. A control group used a standard bilingual program used in the Madrid school system, and both methods were tested in schools in both low- and middle-income areas. The children wore special vests equipped with voice recorders, which enabled the researchers to track how many English words and phrases they uttered.

Follow-up testing 18 weeks later showed the children retained their knowledge, that there was no learning discrepancy between children from different economic backgrounds, and that better learning a new language had no negative impact on the child's performance in their primary language.

"Science indicates that babies' brains are the best learning machines ever created, and that infants' learning is time-sensitive. Their brains will never be better at learning a second language than they are between zero and 3 years of age," said co-author Patricia Kuhl, co-director of I-LABS and a UW professor of speech and hearing sciences, in the press release.

To learn more about the study and see examples of the method, check out this I-LABS video:

Now That's Interesting
A March 2017 report by the American Academy of Arts & Sciences found that 66 percent of European adults could speak at least two languages, while only 20.7 percent of American adults knew more than one.