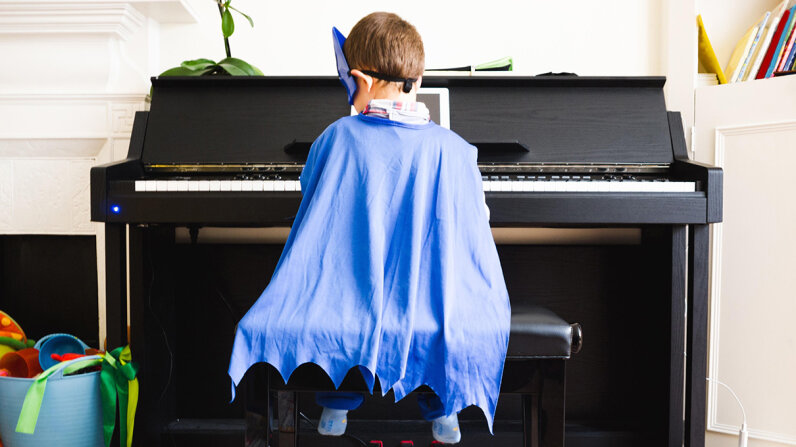 Donning a cape or a crown could help kids get work done -- even when they're tempted by attractive distractions. ballero/iStock/Thinkstock

Pretending is fun. Take the simple task of making breakfast: Would you rather make scrambled eggs while pondering your utility payments or, say, pretend you're a short-order cook tasked with making the World's Best Scrambled Eggs for a celebrity? Breakfast is a lot more interesting when there's something at stake.

According to a recent study in the journal Child Development, kids are savvy to this trick. Aiming to test the benefits of self-distancing (viewing personal experiences from an outsider's perspective) on children's perseverance, the researchers asked 180 kids, ages 4 or 6, to do a pretty boring computer task for 10 minutes. Although all the kids had to do was press a key when they saw a certain image, they were told the task was important and that they had to be "good helpers." They could take breaks to play a game on an iPad if they wanted.

The researchers split the kids split into three groups, and asked each to think about its performance on the given task from a certain perspective: self-immersed, third-person or exemplar. Kids in the self-immersed group asked themselves, "Am I working hard?" The third-person group reflected on the task by asking, "Is [the child's name] working hard?" And the exemplar group? Those children imagined they were either Batman, Bob the Builder, Rapunzel or Dora the Explorer — well-known characters who are model hard workers — and were given props to help them get in character. They were told to ask themselves, "Is [whatever character was chosen] working hard?" Every minute of the task, a recorded voice prompted the children with their allotted question.

The researchers posit that when the children used third-person or impersonated characters, the kids distanced themselves from the boring task and tempting game, allowing them to gain more focus and self-control. "Taking an outsider's perspective on one's own behavior can improve perseverance in the face of entertaining distractions," the researchers say in the study.

But interpreting these results is not so simple. Is pretending to be a character just fun? Does it make kids think like their powerful alter ego? The study authors say answering these questions will require more research. Regardless, the current study suggests that for kids, sticking to a task might be easier with role play.

Now That's Interesting
In a related prior study, the researchers found that 5-year-olds also benefited from using third-person and fictional characters to create psychological distance, but 3-year-olds did not.