by Kate Kershner Jul 12, 2016
Getting your soul explored for much longer than three seconds just doesn't feel right. I Love Images/Getty Images

Everyone knows that the eyes are the window to one's soul. (Or at least everyone who needs a clichéd, pseudo-intellectual pickup line knows that.) But even when we're having a deeply meaningful moment — staring soberly into the stained-glass of a person's heart — we will soon find ourselves thinking, "Wow. This is extremely awkward."

Because while we might write poems, songs and general odes to the beauty of the eyes, it doesn't mean that prolonged eye contact is something a lot of us enjoy.

British researchers asked a huge range of folks visiting the London Science Museum to take part in a study measuring just how much eye contact is too much. The visitors watched video of an actor or actress making eye contact with them from a tenth of a second to just over 10 seconds. The participants' pupil dilation was recorded, and they were also asked whether each duration was comfortable or not.

In general, pretty much everyone found that a duration of two to five seconds (and an average of about three seconds) was the right amount of eye contact. (Nobody thought that less than a second — or more than nine seconds — was agreeable.)

It's important to point out the pool they were drawing from. They had almost 500 participants from 56 nations, which means that a vast array of different cultures (and social norms) were represented. The participants also filled out a personality survey, which yielded a bit of a surprise: There weren't any correlations between personality and preferred length of locking-eyes.

So next time you're trying to put someone at ease, it might be best to give them a good three seconds of eye contact before averting your gaze. Nobody wants their soul explored for much longer than that.

The 5 Animals Most Suitable to Replace Your Family Pet

Half the World Will Be Nearsighted by 2050 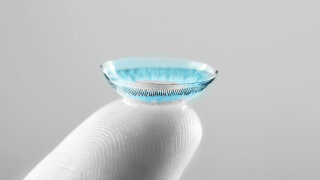 10 Crazy Things Contacts Can Do