Browse the article Can a Vision Board Really Affect Your Future? 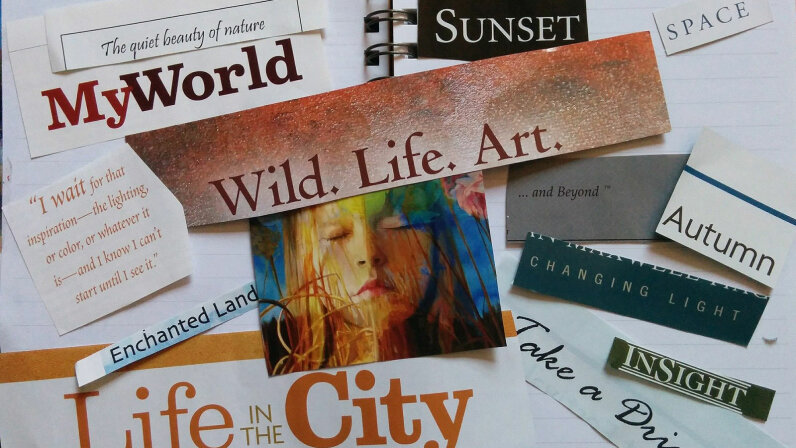 Vision boards can be more than pretty wall hangings. Some people swear by them to achieve goals. Sh1ra/Pixabay

Want a new love interest, meaningful career or a better self-image? Some people swear by the power of the vision board, a tool they use to display, and then hopefully achieve, specific life goals.

The concept has been around for a couple of decades now, and was popularized by a handful of books and celebrities, probably most notably, Oprah Winfrey. It's based on the universal Law of Attraction, which basically says that our minds are powerful tools that can turn thoughts and desires into reality. "What we focus on expands and becomes our reality. Where intention goes, energy flows," says Roswell, Georgia, "life essence" coach and vision board instructor Dacey Paul in an email interview.

Take 12-year-old Aliya Jo Ramey, for example. In 2018, the young dancer/actress fell in love with Broadway and subsequently learned about an open call for "The Lion King." "At the end of 2018, my entire family made vision boards for the new year because we wanted to effectively prepare for 2019," emails her mother, Kirsten Ramey. On Aliya Jo's board, "She put 'Broadway' in the center and surrounded it by words and pictures (dancing, singing, exercise, healthy eating, etc.) She broke each of those pictures down to goals and prayed each day with myself, her dad and sisters," her mother recalls.

It didn't take long for Aliya's hard work and vision to pay off, as she earned the part of Young Nala on Broadway in February 2019. "The whole vision board thing is even hard for me to believe!" her mother says.

"Creating a vision board provides a clear focus for your dreams of a fulfilled, joyful life," says Paul. "The important thing to focus on is how you want to feel and create a vision to support that desire. Photos of these desires are placed on your vision board so that you can look at them and feel the feeling associated with them."

Is There Any Science Behind Vision Boards?

The effectiveness of vision boards has yet to be thoroughly and definitively researched, but similar studies are inconclusive. Dr. Neil Farber, writing in Psychology Today, pointed to several studies that showed people who visualized a positive outcome were less likely to take concrete steps to make their goals happen. Still, some of the studies showed that visualizing the work to achieve a goal (like training for a sport or studying for a test) was more likely to make the participants do the hard stuff (i.e., studying for the test), as opposed to just picturing the end result (getting an "A.")

Others see visualization as a way to get motivated and keep goals top of mind. Indeed, elite athletes have used visualization techniques as part of their training for decades, to prepare them for success. One study showed that people who visualized lifting weights before they went to the gym were able to lift more weight than those who didn't.

Paul says your mindset is important to the creation and success of the boards. "Vision boards can be unsuccessful if you have the belief that they don't work. It's as simple as that!" she says. "If you believe in the vision you created, then your dreams can be realized."

Making a Vision Board

The process of making a vision board is easy and inexpensive, involving materials as simple as a piece of poster board plus lots of different magazines, drawings, printouts of inspirational words, and of course, glue. Simply, cut out pictures and drawings that appeal to you and glue them to the board. Paul suggests placing the completed vision board in a location where it can be viewed several times a day. "Your thoughts are powerful! Visualize and feel the feeling of obtaining your heart's desire," she says.

Vision boards can have different functions. They can be goal-oriented (for instance toward earning more money), or theme-related (such as a travel destination) or intuitive (you're not sure what you want so rather than tearing out pictures that fit a theme or goal you just tear out pictures that appeal to you). You may want to spend a few minutes sitting still and thinking about your intention before starting the creative process.

Jessica (who asked that we withhold her last name) is an ESOL teacher in Atlanta who recently created a travel-themed board. "I put it up in my home office, so I could look at it and be reminded each day," she says. "No results on this one yet," she notes via email, "although I've been reminded to look up cheap flights more often!" But she's not discouraged. "I've done [vision boards] before with words and sayings, more like affirmations," she recalls. "It worked in helping my mindset."

Now That's Cool
Want to encourage your friends to follow their dreams and ambitions? Host a vision board party! Such an event can be as simple as a few people, some poster board and a stack of old magazines, or you can hire a professional (like Dacey Paul) to lead the way. People looking to go that extra mile can even become a certified vision board party host!