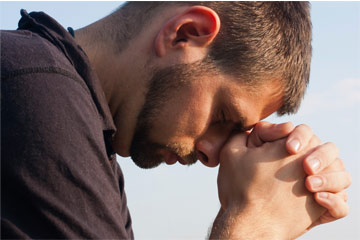 What factors cause clinical depression to arise in one person but not another?
iStockphoto/Thinkstock

That doesn't mean the question is now moot. It's not necessarily the established facts that make the causation question interesting, but rather the exploration of (and between) different factors.

Before we dig into those factors, let's acknowledge how broad the term "mental illness" is. It may bring to mind a severe psychotic disorder, like schizophrenia, but mental illness has many shades of severity, both between diagnoses and within them. To start out, let's look at two common categories.

Of course, this is just a small sample. Conditions as disparate as Alzheimer's and anorexia are also mental disorders. And while we can't make a comprehensive list of every potential cause of every known mental disorder, we can discuss how one condition can illustrate both genetic and environmental factors, while still not entirely revealing much about why mental illness affects one person and not another.

And maybe it's something that could nearly be called bad luck. According to the journal Pediatrics, adults who were spanked as children (also shoved, slapped or grabbed -- actions short of harsh physical or sexual abuse, in other words) were between 2 and 7 percent more likely to develop a psychiatric disorder (including mood disorders like depression and alcohol or drug dependencies, as well as more severe psychotic disorders) [source: Healy].

That might make you think that our mental health is extremely sensitive and subject to vulnerability not by a huge crisis, but by a less significant event. Let's read on to find out why we shouldn't be too worried that a small action will hurt us badly in the long run.

If the Genes Fit

Determining the genetic causes of mental illness isn't as simple as a blood test. Because there are so many mental disorders, attempting to find a genetic link can be tricky. Or is it? A 2013 study in the Lancet showed that five mental and developmental disorders -- schizophrenia, bipolar disorder, autism, major depression and attention deficit hyperactivity disorder -- share several genetic variations [source: Kolata].

Of course, genetics and environment aren't mutually exclusive. It might seem superficially that if you and your identical twin both had bipolar disorder, a strong genetic link would be likely. But if you and your twin both experienced extremely similar environmental influences -- from the air quality to the food you ate to the medicines you took when you had a headache, to list a very, very few -- the results wouldn't necessarily mean as much. It would be extraordinarily difficult to point a finger at one or the other (not to mention impossible to raise two kids with the exact same environmental influences).

That being said, if we're looking for a strong case for genetics causing mental illness, schizophrenia is a good candidate. When a parent is diagnosed schizophrenic, the probability of that person's children developing schizophrenia is 10 times higher than that of the general population [source: Encyclopædia Britannica]. (Only about 1 percent of the population is generally at risk to develop the disorder.) If both parents have the disorder, the child's risk takes a stunning jump, increasing the probability of a diagnosis by anywhere from 35-65 percent [source: Encyclopædia Britannica].

Moreover, there's a good example of twin genetics for schizophrenia. If one fraternal twin is schizophrenic, the likelihood of their twin being diagnosed is 12 percent; if one identical twin has the disorder, the number spikes to 40 or 50 percent [source: Encyclopædia Britannica].

And schizophrenia isn't the only example of familial studies that link mental illnesses with genetics. Schizophrenia, manic depressive illness, major depression, attention deficit hyperactivity disorder, panic disorder (to name a few) have all been shown to carry a genetic influence [source: Hyman].

But because you're a smart cookie, you might also recognize that the twin schizophrenic study, for one, is also a strong indicator that genetics aren't just to blame for mental disorders. After all, if schizophrenia were purely a genetic condition, both twins would get it. So what other factors contribute to mental illness?

In Between Genes and Environment

Epigenetics (the study of changes in genes) is a newer field of study that could lead us to a greater understanding of the causes of mental illness. Scientists are studying whether experience can influence a change in genetic activity while not changing the chromosome itself. In other words, an environmental factor could decide if a gene switches "on," and affect one person with a mental illness but not another with the same genes.

It's a Mad World

If you think determining how genetics affects mental health is fraught, trying to figure out how nongenetic factors could lead to mental disorders can throw you for an even bigger loop.

How far back in a person's life do we look for an environmental trigger? How do we safeguard against ignoring a less catastrophic event (an allergy), and singling out only events we find compelling (the use of psychotropic drugs)? How can we determine if a genetic component interacts with an environmental one?

The latter scenario is probably the trickiest but also extremely likely. Most mental health experts believe that a combination of genetic factors and exposure to environmental factors cause mental illness. It's multifactorial. And schizophrenia is back to bolster that claim.

A study by the Swiss Federal Institute of Technology found some rather startling news about how environmental factors might contribute to a schizophrenic mind -- and when those factors might be most poised to come into play. Using mice that were specially bred to complete a life cycle at a faster rate, they found that a viral infection or influenza during the first stages of a mother's pregnancy, combined with exposure to major stress during puberty, increased the likelihood of the mice developing schizophrenic-like brain functioning [source: Rüegg]. Now don't get too alarmed; researchers pointed out that it's not uncommon for mothers to get infections in pregnancy. Nor should you throw in the towel if you had a stressful middle school experience. Since only 1 percent of the population is schizophrenic, the flu and bullying does not a schizophrenic make.

We also know that brain chemistry must play a part in mental illness, because we know that giving people medication that addresses brain chemistry often works to regulate or resolve the disorder. But observing brain biochemistry isn't an easy process; you can't exactly crack open a person's head and ask them to say "ahh." What we do know is that our brain cells (or neurons) are excited or inhibited by neurotransmitters. And if we have abnormal amounts (large or small) of these neurotransmitters, we might observe a marked deviation in behavior or mood.

So there you have it: We don't know the exact causes of mental illness, but we have some really compelling cases for several factors.

If you're really interested in what causes mental illness, three pages won't do. Research these days is being done at a steady clip to find any indications how genetics or outside influences affect the functioning of the human brain. To keep up to date, don't feel the need to subscribe to the heady scientific journals; just keep up with the news.