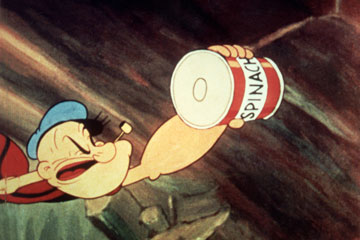 Is it really that easy, Popeye?
Paramount Pictures/Getty Images

Baumeister's groundbreaking study was something of a downer with its talk of "a potentially serious constraint on the human capacity for control ..." On the other hand, it also presented willpower as something like a muscle. Use it too much and, in the short term, you wear it completely out. In the long term, however, the practice makes you stronger [source: Carr].

That's all well and good in the long term, but what about right now? Isn't there a way to boost our faltering resolve as the villainous cupcakes and sleazy neon signs close in on us? According to Baumeister and "Willpower: Rediscovering the Greatest Human Strength" cowriter John Tierney, we can always turn to our good friend glucose.

Glucose is a simple sugar found naturally in various plants -- and somewhat unnaturally in various snack items. It tastes great, sure, but it also energizes the body and brain. The writers say that a shot of sugar in the form of a quick juice box partially restores willpower (as well as cognitive capacity), much like a power-up in a video game.

But don't start stockpiling granola bars just yet! According to Stanford University psychologists Gregory M. Walton and Carol Dweck, our belief system also plays a vital role in how long our willpower holds out against desserts and decadence. The Stanford duo, along with psychologist Veronika Job, found that test subjects on the lookout for signs of willpower fatigue tended to slack off when they felt their resolve wavering -- while people who felt their resolve was limitless pressed on, wearied but relentless [source: Walton and Dweck].

These experiments provide a little insight into the mind-body connection -- that it's not merely a Platonic case of rational intellect versus base urges. A shot of sugar can help the restore diminishing will, but so can the intense belief that willpower is inexhaustible. Maybe a little of both strategies provides the perfect strategy.

Either way, we arrive on the shores of another fascinating question: Do some people possess more willpower than others?

Do Animals Have Willpower?

We often think of temptation as a tug-of-war between our animal nature and higher intellects. As it turns out, however, nonhuman animals can muster a little willpower, too. Studies show that glucose helps dogs resist temptation, and chimpanzees can distract themselves from sweets by focusing on other objects. Crazy, huh? Read "10 Surprising Behaviors in Nonhuman Animals" for even more examples of well-behaving beasties.