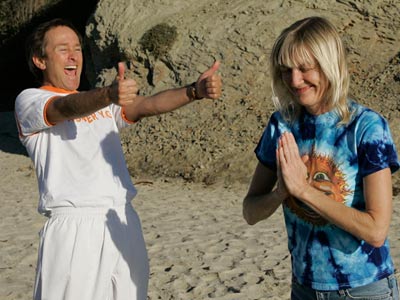 Many people learned of the work of Dr. Patch Adams through the Robin Williams movie of the same name. If you were inspired by the film, in which a doctor sees how humor can heal, but didn't have the desire to go to medical school, then becoming a laughter yoga instructor might be for you. Anyone can become a laughter yoga instructor, provided he or she has an interest in helping people to laugh.

Many laughter yoga instructors have studied with Dr. Kataria, who is working on setting up Laughter Yoga Universities all over the world. Until then, those interested in becoming teachers can attend the Kataria-approved Certified Laughter Yoga Leader Training, which is offered in several locations across the United States throughout the year.

There's no single way to lead a session of laughter yoga, so instructors are encouraged to use their training in combination with their own creativity to get other people laughing. Most laughter yoga instructors begin working with laughter clubs, which are social organizations devoted to the practice of laughter yoga. In addition to regularly laughing together, these groups serve as a form of social support for members; the Laughter Yoga International Web site tells the story of a woman who became so depressed after the death of her longtime husband that she began refusing food. Members of her laughter club gathered in her home to take care of her and ensure that she ate. The support provided by the club members sustained the woman, who in gratitude began starting other laughter clubs [source: Laughter Yoga International].

We have tons of information about laughter that you can throw out on the next World Laughter Day -- just head on over to the next page to see some related articles.