Reflection vs. Experience in Measuring Happiness 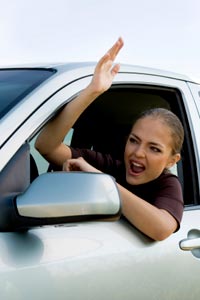 Psychologists and scholars have questioned the accuracy of self-reported happiness, considering that it's a highly transient, subjective emotion. Think about what would happen if you polled people on personal happiness while they were driving in rush hour traffic versus after leaving a Saturday afternoon movie. Their emotional state might impact their responses, with the drivers emerging as the less satisfied set.

Consider the Satisfaction with Life Scale, developed psychologist Ed Deiner. It asks people to rate the following five statements on a 1-to-7 scale, from not true to absolutely true:

The higher the score, the greater amount of satisfaction someone supposedly has with life.

To account for people's emotional ebbs and flows, some researchers use experience sampling to measure happiness [source: Wallis et al]. This breaks down global contentment into periodic happiness check-ups. By contacting pollsters randomly over time or having them record daily activities and corresponding enjoyment, psychologists can get at the happiness question from another angle.

Framing happiness in terms of timely events, instead of reflective assessments, can alter the outcomes. For instance, a Time Magazine survey and a Princeton University study both dealt with the happiness effects of sex. Time asked respondents about it from a reflective stance, whereas Princeton integrated experience sampling. In the Princeton survey, sex ranked as participants' most positive activity [source: Wallis et al]. The Time respondents, on the other hand, rated it far lower. The Princeton participants weren't necessarily having a better time in bed than the Time participants; rather, since the pleasurable romp was fresher in their minds, the positive emotional effects may have registered more strongly.

Similar inconsistencies between real-time experience and memory also appear in Harvard University's Grant Study that has followed 268 male students for 72 years. Digging into specific facets of their psyches -- unmet career aspirations, sexual inhibitions, fractured relationships -- revealed anxieties, insecurities and loss [source: Shenk]. Yet, time and again, men's global happiness assessments rang positive; few would change much about their lives and have found contentment in old age. From that, it seems that surviving those bumps and bruises brought the most fulfillment in the end.

Condensing happiness down to a number or ranking can discount the intricate formula that goes into true contentment. Scoring a happiness high is a dice roll influenced by genetics, personality and plain old luck. But a trip to Denmark might not hurt the odds.