How do liquid explosives work, and what would terrorists do with them on a plane? 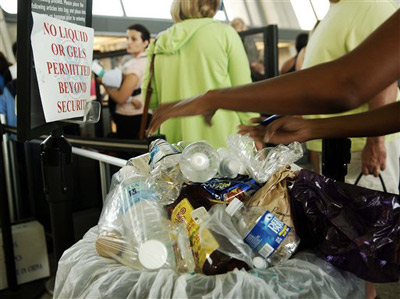 A trash container overflows with water bottles and other liquid items near the security checkpoint at Dulles Airport on August 10, 2006, in Chantilly, Va.
AP Photo/Kevin Wolf

On August 10, 2006, authorities in Great Britain announced that they had arrested several people in connection with a plot to attack airplanes with liquid explosives. The attackers planned to disguise the explosives as ordinary liquids and smuggle them aboard. For this reason, authorities in both the United States and Great Britain warned all passengers that liquids would not be allowed in carry-on luggage until the crisis passed. The ban on liquids included hair spray, shampoo and beverages -- items people travel with all the time.

So what exactly are liquid explosives, and what do they do? Most explosives work in basically the same way. They burn or decompose very quickly, producing lots of heat and gas, which rapidly expands and can tear things apart. Usually, an explosive material requires some kind of stimulus, like heat or shock energy, to get the process started. You can learn more about different types of explosives in How Bombs Work.

Many people don't think of explosives as liquids, though. Most of us imagine them as solids, like gunpowder or C-4. But you've probably heard of one liquid explosive already -- nitroglycerin. Nitroglycerin was invented in 1847, and it's made by adding acids to glycerin. Since exposure to it dilates people's blood vessels, it's used as a medical treatment for angina pectoris, or heart pain.

Nitroglycerin is made of carbon, nitrogen, hydrogen and oxygen. A physical shock can start a chain reaction that breaks its molecules down into carbon dioxide, water and oxygen. The breaking of the bonds between the atoms releases an enormous amount of energy in a very short amount of time.

Nitroglycerin is a component in some relatively stable solid explosives, like dynamite. But as a liquid, it's extremely dangerous and volatile. You typically have to use a blasting cap to detonate a stick of dynamite, but you can accidentally trigger a nitroglycerin explosion with a physical shock. It doesn't blow up at the slightest movement as depicted in some movies and TV shows, but you can detonate it by hitting it.

Nitroglycerin is oily and clear, so if you poured some into an opaque lotion bottle, no one but you would know what was really inside. However, nitroglycerin's inherent instability would make this bottle very dangerous for you to carry around.

Because it's clear and oily, nitroglycerin would be easy to conceal in lotion or shampoo bottles.
Ronnie Bergeron/MorgueFile

The attackers most likely did not plan to use nitroglycerin, but the liquid explosives they chose probably had similar chemical properties. Like nitroglycerin, most liquid explosives are made of unstable molecules. These complex molecules break down into ordinary, stable molecules when exposed to the right stimulus. Even a very minor shock can start the process, and since it involves the breaking of atomic bonds, it releases enormous amounts of energy.

The terrorists most likely intended to remove the explosives from their carry-on luggage and detonate them while the planes were over the Atlantic Ocean. They may have planned to use explosives that require the mixing of two different liquids in order to start the reaction. Unnamed sources have stated that the attackers planned to mix a liquid dyed to resemble a sports drink with a peroxide gel to create an explosive substance.

According to other sources, the attackers intended to use triacetone triperoxide, which can be made from readily available substances like hydrogen peroxide, acetone and acid. Like nitroglycerin, triacetone triperoxide molecules are made of hydrogen, oxygen and carbon. When it explodes, it breaks down into large amounts of ozone and acetone.

Regardless of which exact substance the attackers planned to use, the liquid nature of the explosives would have been central to the plot for two reasons:

Check out these links for more on nitroglycerin and liquid explosives: