What Will the Lunar Liquid Mirror Telescope See? 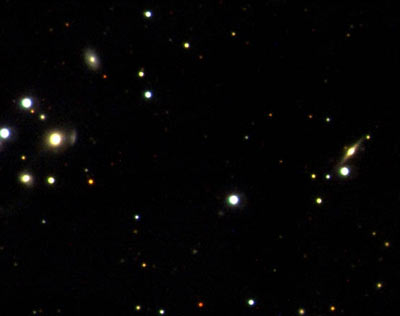 A liquid mirror telescope placed on the moon instantly has a major advantage over an earthbound telescope: It's free from atmospheric distortion, which affects celestial images. For the same reason, it's also able to detect more forms of electromagnetic energy. Most types of electromagnetic radiation, except for visible light and radio waves, are absorbed by the Earth's atmosphere. On the moon, which has no atmosphere at all, a telescope would be exposed to the full spectrum of electromagnetic radiation -- gamma rays, X-rays, ultraviolet light, visible light, infrared radiation, microwaves and radio waves.

A telescope using an ionic liquid as its primary mirror would be particularly sensitive to visible light and infrared radiation. This would be important for observing the universe's most distant objects, which are moving rapidly away from the Earth. The Doppler effect causes them to create radiation in the longer-wavelength, infrared portion of the spectrum.

Size is also a key factor. In the low-gravity environment of the moon, it's much easier to build big structures. The team designing the LLMT believes it can build a primary liquid mirror that is 66 feet to 328 feet wide. Such a mirror would be able to observe objects 100 to 1,000 times fainter than the next generation of telescopes -- including the James Webb Space Telescope -- are able to. That means astronomers could use the instrument to peer deeper into space and time than ever before. For the first time, we could be able to detect the very early phases of the universe right after the Big Bang, expanding our understanding of how the newly formed universe behaved.

When Might a Lunar Liquid Mirror Telescope Become a Reality?

Right now, the LLMT is still a concept. The project has received funding from the NASA Institute for Advanced Concepts for a study to show how a telescope on the moon might support astronomy. This is important because the moon is the first target in the Vision for Space Exploration, an initiative seeking how to go out beyond Earth's orbit for purposes of human exploration and scientific discovery. If NASA can demonstrate that lunar outposts would be practical, with both economic and scientific value, then the public -- and ultimately Congress --­ might be willing to show appropriate financial support.

A lunar liquid mirror telescope is among several projects that will help NASA prove the feasibility of space exploration. Even still, the earliest it could be deployed is 2020. Until then, astronomers will have to be satisfied with liquid mirror telescopes, such as the Large Zenith Telescope, that view the heavens from Earth.

To find out more about lunar liquid mirror telescopes, check out the links below.