The Future of Lunar Rovers 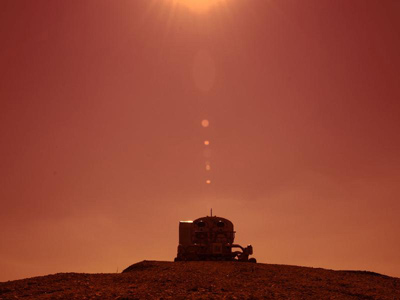 Before the new lunar rover concepts go anywhere near the moon, they will be tested and retested in lunarlike environments. Such environments should have terrain similar to the moon's and ideally experience temperature extremes. NASA has several spots where it likes to try out its concepts.

Desert environments such as the sand dunes of Moses Lake, Wash., and Black Point, Ariz., provide out-of-this-world-type terrain, as well as extreme heat, like the temperatures encountered in direct lunar sunlight. Cold temperatures and lunar landscapes can be found at the Haughton base on Devon Island in the Arctic Circle. Antarctica also provides a similarly well-suited environment for testing lunar rover and lunar base concept technologies.

In a recent three-day test of the SPR at Black Point, a team of astronauts and geologists were charged with learning as much as they could about the lava flows by using the SPR. Astronaut Mike Gernhardt reported that participants spent less time in space suits and that they were more productive. Everyone involved in the program hailed the test as a success. The participants even learned how to change a flat tire while wearing a space suit [source: NASA].

Currently, only China and the United States are actively pursuing a manned lunar program. The Chinese recently unveiled a nuclear-powered robotic lunar rover, but they haven't discussed a manned vehicle. So far, NASA has more experience in placing a man on the moon and in designing and operating lunar rovers.

The lunar truck and SPR represent only two technologies in the NASA Exploration Division's Return to the Moon project. NASA is also developing and testing concepts such as inflatable habitats for a lunar base. Eventually, the launch vehicles Orion CEV and Ares may replace the current space shuttle. With all these technologies in hand, NASA hopes to return men to the moon by 2020.

­Keep reading for more links on articles you might like including lunar landings, Mars rovers and the Google Lunar X Prize.