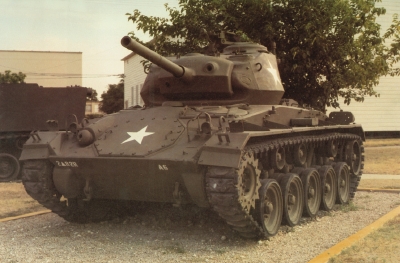 The M-24 Chaffee Light Tank was named by the British after General Adna R. Chaffee, who was the chief proponent of armored warfare in the United States before the start of WWII.
©2007 Publications International, Ltd.

The M-24 Chaffee Light Tank grew out of British experience in North Africa with the M-3 Stuart. The light tank's agility and speed was very desirable, but the M-3/M-5 series was too lightly gunned to be of much value after Germany introduced the Pz.Kpfw III, Pz.Kpfw IV, and Pz.Kpfw V Panther.

In April 1943 design studies began for a new light tank that would retain the best features of the M-3/M-5 but couple them to a heavier gun. The lightweight 75 millimeter M6 gun developed for the B-25 Mitchell attack bomber was selected. Its short recoil mechanism was ideally suited for the close confines of a tank's turret.

The Cadillac Division of General Motors, which had been so instrumental in the development of the M-5 Light Tank, was chosen as the major designer. They first tested the 75mm M6 gun on the M-8 Howitzer Motor Carriage -- which used the M-5 hull and chassis. The concept worked, but the M-5's hull and chassis were not large enough.

Another design, taken from the T-7 experimental light tank, was selected instead. The T-7 chassis was larger and heavier but still within the overall 18-ton weight limit. The same twin Cadillac V-8 engines and hydromatic transmission used in the M-5 were fitted to the new chassis. They were mounted on rails for quick access and removal.

Armor protection was kept low, from a maximum of 2.5 inches in the turret to a minimum of .9 inch on the hull top, to save weight. But the new light tank's armor was rounded and sloped to achieve greater armor protection than the M-5. In keeping with the theory behind the use of light tanks, the M-24's speed and agility were to make up for what it lost in armor protection.

The new tank was designated the T-24 for testing, which started in October 1943. Initial tests proved so successful that an order for 1,000 was placed immediately. The order was later increased to 5,000. The M-24 -- as it was designated for operational purposes -- was produced by both Cadillac and Massey-Harris. A total of 4,415 were manufactured before the war ended in 1945.

The first M-24s reached American armored units in November 1944 and served throughout the European theater until the end of the war. British forces also received the new M-24, although in nowhere near the numbers of either the M-3 or M-5, and named it after General Adna R. Chaffee, the first commander of the United States armored forces. The United States subsequently adopted the name.

The M-24 saw extensive service in Korea as part of the "combat team" approach, adopted in 1944. In the combat team, one tank design in each category -- light, medium, and heavy -- was standardized, and its chassis, hull, and power plant served as the basis for the special-purpose vehicles needed to support the tanks in the combat team.

The M-24 was widely used by the United States and other countries, including Great Britain, long after World War II. Even in the late 1980s the M-24 could still be found in operation with a number of smaller nations.

Continue to the next page to learn the specifications of the M-24 Chaffee Light Tank. 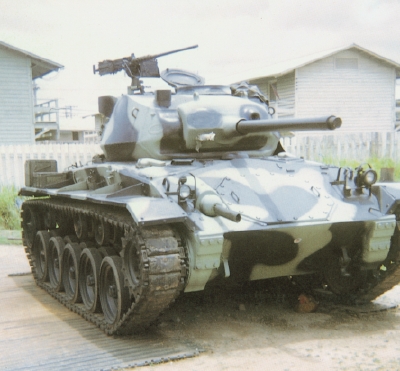 The M-24 Chaffee Light Tank sought to combine the speed and mobility of the M-3 Stuart with newer, more powerful weaponry. Find the specifications for this light tank here: