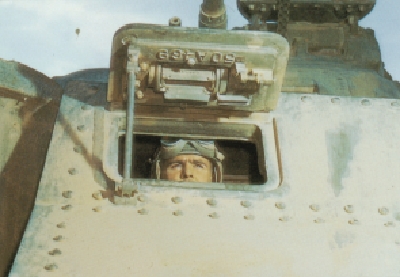 Following the First World War, America, shocked by the slaughter of trench warfare and the vindictiveness with which the French and British persecuted the new moderate government in Germany, withdrew into a shell of isolationism that would endure until Japan attacked on December 7, 1941.

Few in Washington could foresee the possibility of the United States ever going to war again to protect European interests. The result of this thinking was the National Defense Act of 1920, which gutted the armed services. Only the Navy was seen to have a role in extraterritorial warfare, and that role was directed primarily at the Japanese.

Even the Navy was dealt a near mortal blow by various acts of Congress that prevented or slowed the development of the aircraft carrier, the submarine, and the amphibious vehicle. The Washington Naval Treaty of 1923 even limited the number and size of large capital battleships that could be built.

The National Defense Act disbanded the armored corps and placed the tank with the infantry, thus relegating both light and medium tanks to the infantry support role. The heavy tank class was eliminated.

Not until Adolf Hitler came to power in Germany and gobbled up Austria, the Sudetenland, and Czechoslovakia, did the United States begin to awake to the danger in Europe. Even then, isolationist sentiment remained so strong that President Franklin Roosevelt was forced to resort to various stratagems to rearm the country in the face of stiff congressional opposition.

Except for a few T-4s in 1936, no medium tank had been produced in the inter-war period. In 1938 designers at Rock Island Arsenal, Illinois, the center for American tank design and, until 1940, tank production, developed the T-5, a radically new medium tank design.

It used a radial engine developed by the Wright Continental Company for aircraft use, a new type of suspension system in which three pairs of road wheels per side were mounted on bell cranks, and a front drive sprocket. It was equipped with a 37mm main gun and two .30 caliber machine guns.

Once adopted, it was designated the M-2 and underwent numerous upgrades. Rapid advances in tank design in Germany and Russia made the M-2 obsolete, and it was relegated to a training tank.

To learn about the replacement for the M-2, the M-3 Grant/Lee Medium Tank, continue to the next page.

The M-3 Grant/Lee Medium Tank was armed with a 75mm main gun, a 37mm gun in the turret, and up to four 3.0 caliber Browning machine guns.
©2007 Publications International, Ltd.

The M-3 Grant/Lee evolution needed to happen quickly. The invasion of Poland, the British experience in the desert, and the invasion of France all showed that a 37mm gun was not powerful enough to deal with enemy tanks.

In August 1940 General Adna R. Chaffee, the commander of the new Armored Force, met with representatives from the Ordnance Department to finalize plans to produce the M-2A1 Medium Tank. During the meeting, he demanded and received agreement to build a tank capable of carrying a 75mm gun.

The M-2 Medium Tank chassis and hull could not support a larger turret or absorb the recoil forces from a 75mm gun. To speed the new tank into production, a design compromise was reached. The new tank would mount a 75mm gun in a limited traversing sponson on the right side of a heavier chassis and hull from a previous experimental tank.

Thus, even while the Detroit Arsenal -- the factory intended to build the M-2 Medium Tank -- was itself being built, the M-2 was canceled, and a new contract for the M-3 -- for which design work had not yet been completed -- was issued.

The M-3 thus evolved from the M-2, but indirectly. Central to the M-3's production was a new tank factory -- the Detroit Arsenal.

In 1939, when it was clear that the United States would have to rearm, Ordnance sought to place contracts for tank production with existing heavy industrial companies. But William Knudson, president of General Motors Corporation and a member of the National Defense Advisory Commission (NDAC), pointed out that heavy industrial firms, such as the builders of railroad cars and generators, were inexperienced in mass production, particularly the overwhelming quantities that would soon be needed.

An M-3 Grant/Lee Medium Tank driver peers through the raised driver's hatch, which is in the hull just below, and to the left of, the 37mm turret gun.
©2007 Publications International, Ltd.

Knudson's arguments persuaded the NDAC, and they in turn persuaded the Army. The Detroit Arsenal was commissioned specifically to build tanks. The facility was built in six months on 113 acres of land in Warren, Michigan. It was the largest manufacturing facility built to that time, and it was operated by Chrysler Motors.

In its most widely produced form, the M-3 used a cast-and-welded hull that was versatile enough that a diesel rather than an aircraft engine could be fitted when the latter was in short supply.

One version -- the M-3A4 -- even had four Chrysler automobile engines combined in one power pack and was referred to as the "eggbeater." The M-3's armor plate of 1.45 inches maximum was considered adequate when the design was finalized in 1940.

See the next page for a rundown of M-3 Grant/Lee nomenclature. 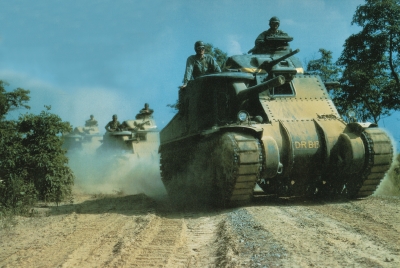 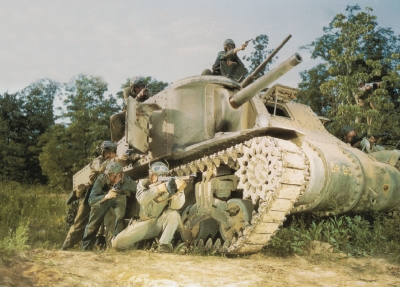 The M-3 Grant/Lee Medium Tank carried a crew of six, five of whom are shown here adding a Colt revolver and tommy gun to the tank's formidable 75mm and 37mm guns.
©2007 Publications International, Ltd.

Oak Ridge, Tennessee: America's Secret Atomic City
Package Bombs Are Rare in the U.S., But Here's How to Spot One
Ghost Tape No. 10: The Haunted Mixtape of the Vietnam War