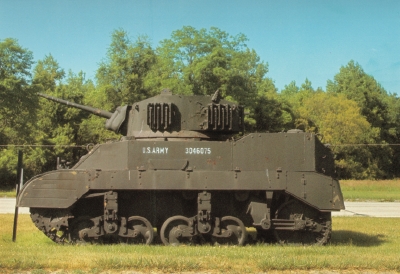 The M-5 Light Tank evolved from the M-3 Stuart. The Cadillac Division of General Motors suggested that the M-3A1 could be improved if two Cadillac commercial engines connected to Cadillac's new hydramatic automobile transmission were installed in place of the single Continental W-670, 250-horsepower engine.

The hull and turrets were redesigned with thicker (2.6 inches), rounded, and sloped armor. The new turret also had a bulge at the rear where a new radio was fitted, enabling all tanks in a unit to communicate with each other. A long M6 gun, first used in the M-3A1, was fitted.

All these changes increased the M-5's weight by a little more than one ton, but the twin Cadillac engines gave it the same 36-miles-per-hour road speed as the M-3A1 series.

British experience prompted the addition of sand shields and a new dual traverse system that allowed the gunner to fire the machine gun while traversing the turret -- a feature especially helpful when dueling with antitank guns.

The M-5 was shipped to Great Britain in 1943 and 1944 and was used widely during and after the breakout from the Normandy beachhead. M-5s traveled with American and British troops into Germany.

The tank also served as the basis for a range of special-purpose armored vehicles: the M-5 Command Tank; the M-5A1 Psychological Warfare vehicle, fitted with a loudspeaker system; the M-5A1 Cullin Hedgerow Cutter, used to scoop up beach obstacles and cut through the tough hedgerows in Normandy; three flamethrower variations; and a reconnaissance vehicle.

The most successful nontank variation was the M-8 Howitzer Motor Carriage, which mounted a 75mm Pack Howitzer for close infantry support.

The M-3/M-5 series proved adequate in service and was liked by the British, but by mid-1943 the Stuart had shown that the day of the light tank had clearly passed. Stuarts were too lightly armored, and their 37mm M6 gun was not powerful enough to deal with the armor plate mounted on the German Panzerkampfwagen III, Panzerkampfwagen IV, and Panzerkampfwagen V Panther.

Continue to the next page to find specifications for the M-3 Stuart (Honey) and M-5 Light Tanks.