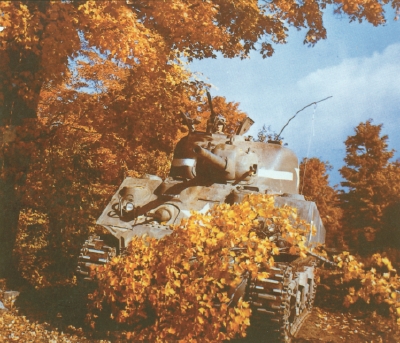 At first, the M-4 Sherman was barely a match for the German Panzerkampfwagen V Panther. Its 75mm gun could penetrate the Panther's side and rear armor only.
©2007 Publications International, Ltd.

As a result of relatively thin armor and the inferior design of ammunition storage, early M-4s tended to catch fire easily. To reduce the problem, ammunition storage racks were set lower in the hull and surrounded by jackets containing a water-glycerin mixture. The two-piece howitzer ammunition was enclosed by armor plating.

The M-4 entered service in late 1942, and its 75mm gun, which could punch through 2.5 inches of sloped armor, was a match for anything that Germany and Japan could field.

When the up-gunned M-4 with the 76mm gun appeared on the scene in 1944, it could penetrate a little more then 4 inches of armor sloped at 30° at a distance of 500 yards. The Panzerkampfwagen V Panther carried 3.14 inches maximum of armor.

The M-4 probably went through more modification and experimentation than any other American tank until that time. Suffice it to say that the M-4

Sherman -- named by the British -- was the most widely produced tank of the war, including the Russian T-34. A total of 49,230 Shermans were built.

A wide variety of main armament was mounted on the M-4, including flamethrowers, rockets, 155mm guns, and 204mm howitzers. A variety of tank destroyers were also built and armed with 76mm and 90mm main guns and heavier armor.

An M-4 Sherman with rocket launchers is shown here in 1944.
©2007 Publications International, Ltd.

The M-4 was also used as a mine-clearance vehicle when equipped with flails and rollers. The most spectacular of these was the M-1 Aunt Jemima mine-clearance device that could be attached to the M-4.

The Aunt Jemima was a mechanical roller consisting of 10 ten-foot-diameter steel wheels divided into two pairs. They were chain driven by the M-4's front drive sprocket and rolled ahead of the tank.

The unit was very effective for clearing mined roads, but it was so heavy a second M-4 often had to push the first.

The Israelis purchased many Shermans on the international arms market in the 1950s and received more from the United States in the form of military aid. Many were converted to Super Shermans and Ishermans with more powerful engines and heavier armor and main guns. Thousands of Shermans were distributed by the United States as military aid to friendly countries.

Find specifications for the M-4 Sherman Medium Tank on the next page.