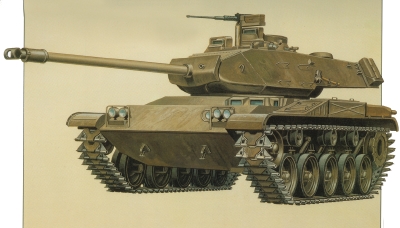 The M-41 Walker Bulldog Light Tank was designed and built as a light reconnaissance tank. It entered service in 1950.
©2007 Publications International, Ltd.

Its predecessor was the M-22, which was intended as an air-transportable tank to support airborne troops. Unfortunately the M-22 was too large for the transport aircraft available during World War II. Similarly the M-41 ultimately grew so large and heavy that it could not be transported by air in the postwar period.

As a consequence, the M-41 found suitable deployment in a limited and counterinsurgency warfare role against lightly armed regular and guerrilla troops. Altogether, 1,082 M-41s were built by the Cadillac Division of General Motors at the Cleveland, Ohio, Tank Plant.

The M-41 was named the Walker Bulldog in 1951 to honor General W.W. Walker, who was killed in a jeep accident in Korea that year. It incorporated most of the lessons learned in World War II.

It was designed around its engine, a Continental or Lycoming six-cylinder, 500-horsepower aircraft engine. The M-41 suspension system used torsion bars and hydraulic shock absorbers. The drive sprocket was at the rear and the idler at the front; there were three return rollers.

The Walker Bulldog carried a 75mm M32 main gun, and one each .30 caliber and .50 caliber Browning machine guns. Its main gun had an automatic loader -- the first to ever be used in an American tank.

The automatic loader was capable of selecting, lifting, indexing, and ramming, as well as catching and eliminating the empty casings. The main gun also had a bore evacuator to eliminate fumes and an integral fire control system.

For more on the M-41 Walker Bulldog Light Tank design, continue to the next page.

The M-41 Walker Bulldog Light Tank design was divided into three compartments: front for driving, center for fighting, and rear for the engine.

The engine and transmission compartment was separated from the rest of the tank by a fireproof bulkhead. A fire extinguisher system was mounted in the engine compartment.

The M-41 was not equipped with a nuclear-biological-chemical protection system, but infrared driving and searchlights gave it a night driving and lighting capability.

The M-41 had a crew of four: commander, gunner, loader, and driver. The loader could override the automatic system at any time. The driver sat in the left front of the hull.

The other three crew members were in the cast-and-welded turret; gunner on the right, loader on the left, and commander behind. The commander and loader each had hatch covers that opened to the rear. The .50 caliber Browning machine gun was mounted near the commander's hatch and used for antiaircraft fire.

Twenty-four nations purchased the M-41 for their armed forces, including five NATO countries. M-41s were used by New Zealand and Brazil.

The M-41 was widely used in Korea in the reconnaissance and close infantry support roles, and even as a tank destroyer. It was deployed in South Vietnam with Republic of Vietnam troops. It also served with Pakistani forces in both wars that nation fought with India and in the Arab-Israeli war of 1967.

The M-41 is no longer in service with American forces.

See the next page for specifications of the M-41 Walker Bulldog Light Tank. 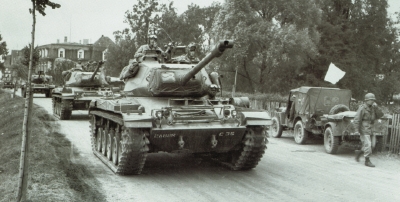