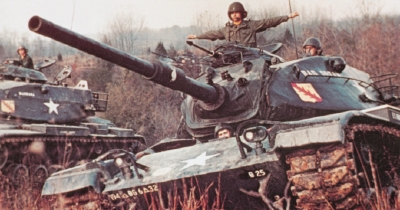 The M-60 Main Battle Tank was developed in response to upgraded enemy tanks. In 1956, intelligence reports regarding tank development in the Soviet Union suggested that a tank more capable than the T-54/T-55 Main Battle Tank (MBT) was being developed.

As the M-48 Medium Tank entered service in 1952, it was considered too heavy, too short-ranged, and too lightly armored to deal with the expected capabilities of the new Soviet tank.

This view of a loader shows his tank commander.
©2007 Publications International, Ltd.

A design team suggested that there was plenty of room for improving the M-48. Upgrade programs were immediately undertaken, beginning with the installation

of a new Continental diesel engine.

But the ultimate goal, up-gunning to the British L7A1 105mm gun, required a new turret. Authorization was obtained for the new tank design, and the first American

Two years later an up-rated M-60, the M-60A1, was put into production. These two versions were followed by 562 M-60A2s, all of which were converted to other armored vehicles like the M-60 Armored Vehicle Launched Bridge or the M-728 Combat Engineer Vehicle.

When the capabilities of the new T-62/T-72 MBTs became known in detail, the U.S.

More than 15,000 M-60s of various configurations were built before production ended in August 1987.

The M-60 Main Battle Tank's hull was basically the same as that of the M-48. It was built of cast-and-welded sections and divided into three compartments: driving, fighting, and engine/transmission. The new turret was better armored and considerably larger, as it had to mount the 105mm main gun.

A nuclear-biological-chemical warfare protection system was added in the M-60A3 configuration. It combined overpressure in the crew compartment with a high-capacity central air filtration system. Fresh air was brought directly to each crew member through a tube.

For more on M-60 Main Battle Tank equipment, continue to the next page.