From Blueprint to Bullet 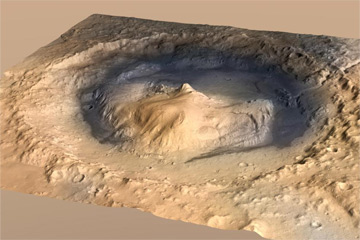 That's a view of Gale Crater, where Curiosity landed. Note that this artist's concept has a vertical exaggeration to give people a better idea of the region's topography.
Photo courtesy NASA/JPL-Caltech/ESA/DLR/FU Berlin/MSSS

Meanwhile, NASA had to decide where the new rover would explore, how it would get there and how the space agency could land it safely -- easier said than done.

Earth and Mars revolve around the sun at different rates -- 686.98 Earth days for Mars versus 365.26 for Earth -- which means their relative distance varies enormously. Reaching Mars on as little fuel as possible meant launching when the red planet passes closest to us [source: NASA]. This was no minor consideration: Mars swings out more than seven times as far from Earth at its farthest extreme (249.3 million miles, or 401.3 million kilometers) than at its nearest approach (34.6 million miles, or 55.7 million kilometers) [source: Williams].

Like a quarterback throwing a pass, the launch system aimed not for where Mars was, but for where it would be when the craft arrived. NASA threw that pass, and the rover-football reached its round and red receiver more than 250 days later, and touched down on Sunday, Aug. 6, 2012 (Eastern Daylight Time).

NASA did not "throw" MSL from Earth's surface, however; the agency launched it from planetary orbit. Here's how: Once the lifting vehicle reached space from Cape Canaveral, its nose cone, or fairing, opened like a clamshell and fell away, along with the rocket's first stage, which cut off and plummeted to the Atlantic Ocean. The second stage, a Centaur engine, then kicked in, placing the craft into a parking orbit. Once everything was properly lined up, the rocket kicked off a second burn, propelling the craft toward Mars.

About 44 minutes after launch, MSL separated from its rocket and began communicating with Earth. As it continued on its way, it made occasional planned course corrections.

Once it hit the Martian atmosphere, the fun really began.