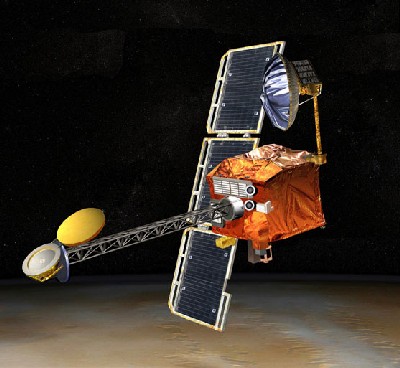 On April 7, 2001, the Mars Odyssey Orbiter took off from Cape Canaveral, FL, onboard a Boeing Delta 7925 rocket. It traveled for approximately six months before positioning itself into an initial elliptical capture orbit. After a propulsive maneuver into a 25-hour capture orbit, aerocapture was used over the course of 76 days to achieve the two-hour science orbit. Aerocapture involves using the Mars atmosphere to slow down and attain orbit.

The orbiter's final operational altitude is about 250 miles (400 km) above Mars in a sun-synchronous polar orbit. In the following two years, the orbiter maps the planet's surface and takes measurements about radiation and elemental composition.

The Mars orbiter is just one in a series of orbiters, rovers and surveyors that NASA plans to launch toward Mars in an effort to learn as much as possible about the planet before sending a human mission there. In the next decade, the U.S. space agency will launch at least one Mars exploration spacecraft in every odd numbered year.

For more information on Mars Odyssey and related topics, check out the links below.