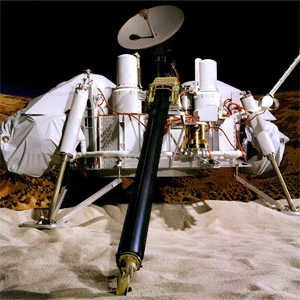 NASA's Viking Project became the very first U.S. mission to land a spacecraft successfully on the surface of Mars. This shot shows a test version of a Viking lander in the original "Mars Yard" built at NASA's Jet Propulsion Laboratory in 1975.
Photo courtesy NASA/JPL-Caltech/University of Arizona

The most enticing thing about Mars exploration is the promise of finding water -- or past evidence of water. "Water is key because almost everywhere we find water on Earth we find life," NASA's Web site points out. "If Mars once had liquid water, or still does today, it's compelling to ask whether any microscopic life forms could have developed on its surface."

The first missions to Mars were flybys; that means they were simply orbiting vessels that sent back photographs of the planet. The first one was Mariner 3 in 1962; however, the first successful orbit and photographs came in 1965 from Mariner 4. When the flybys ended in 1969, the next series of missions were referred to as orbiters. NASA designed these spacecraft for longer-term orbiting around Mars, collecting photographs. Mariner 9, in 1972, was the first to take photographs of the entire surface of Mars.

Orbiting missions have continued, including the 2005 launch of the Mars Reconnaissance Orbiter. The orbiter could spot objects as small as a dinner plate, while also carrying sounders to find subsurface water. Perhaps most important, it's still used as a crucial communications tool for relaying information back to mission control.

But let's wander over to the rovers' predecessors now. Viking 1 and 2, which launched in the mid-'70s, both had landers that descended to the surface of Mars. They were the first to discover that Mars was self-sterilizing, meaning that the combination of ultraviolet radiation with the dry soil and oxidizing nature of the soil chemistry prevents organisms from forming.

When we think of more modern machines landing on Mars, we usually start with the 1995 Pathfinder mission. The Pathfinder consisted of a lander, equipped with a parachute for entering Mars' atmosphere, and the Sojourner rover. The equipment returned thousands of images, as well as 15 chemical analyses of soil and weather data.

In 2003, the Mars Exploration Rover mission team launched Spirit and Opportunity, one of which was still traversing the planet as 2011 ended. Let's crawl over to the next page to learn more about those rovers, their technology and discoveries.