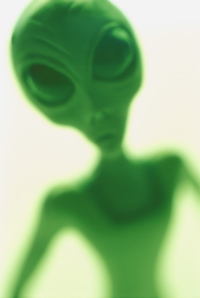 This green guy might be what you're picturing when you think about life on Mars, but microbes are the more realistic possibility.
Antonio M. Rosario/Getty Images

This simple question has captivated minds for centuries. We still lack a definitive answer, although evidence has continued to mount as spacecraft carry out increasingly sophisticated tests for life processes, past and present, including analyzing Martian soil for traces of water and looking for the release of gases such as carbon dioxide, methane and oxygen that might suggest bacterial life.

It's possible that we need to revisit our idea of Martian life, exchanging egg-headed humanoids for much smaller organisms. Microbes are hardy little buggers, and there's good reason to believe that they could exist below ground. For example, biologists have unearthed bacteria living in Antarctica as well as a species, dormant for 120,000 years and buried 2 miles (3.2 kilometers) below Greenland's ice, that successfully awoke from its frozen slumber and started multiplying [source: Heinrichs].

There's also plenty of evidence that Mars' environment billions of years ago could have supported them. As we discussed, water is a key ingredient for life, and we know that Mars used to be wet. Curiosity rover was dispatched to Gale Crater because it marks a spot where water flowed for a long period. This history is recorded in the layer after layer of sediment that built its central feature, the 3.4-mile- (5.5-kilometer-) high Mount Sharp (aka Aeolis Mons), over billions of years [sources: Drake; Yeager].

Indeed, 10 years into its mission, Opportunity found another spot like Gale Crater where ancient water was not too acidic or salty for cells to flourish. Moreover, although Curiosity's drill has yet to locate the organic carbon compounds that would form life-related amino acids, it has dug up hydrogen, carbon, sulfur, nitrogen, phosphorous and oxygen -- a well-stocked pantry for single-celled organisms, if they did exist. Back on Earth, scientists have found Mars meteorites with internal structures that are consistent with a biological source [sources: Grant; NASA; Rosen].

In short, there's plenty of evidence that Mars was friendly to life long ago, but no smoking gun. Even if there were, we have to ask: Could it still be hanging around somewhere?

One promising sign of life would be the discovery of large amounts of methane in the Martian atmosphere. Scientists had previously detected the gas -- 90-95 percent of which on Earth is produced by microbes -- in Mars' atmosphere. They hypothesized that trapped methane from buried microorganisms might be released during seasonal ground thaws. So far, Curiosity's measurements indicate levels 1/10,000 of those found in Earth's atmosphere -- in other words, bupkes -- but, given more time, there's a slight chance that the rover might observe such a seasonal bloom. Then again, the methane clouds observed by scientists could arise from a natural process, such as the release of methane trapped in ice [sources: Savage; Wayman].

For more Mars madness, browse the stories and links below.