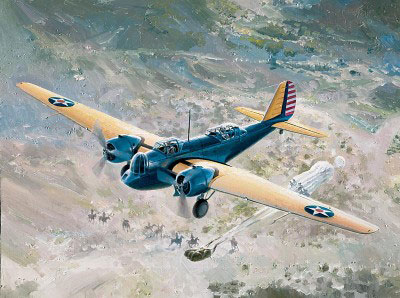 The Martin B-10 was a remarkable leap forward in aircraft design, both in materials and capabilities. The B-10 was not the bomber the U.S. would need to fight World War II, but it was wonderfully predictive.

One of the most important, and to many, most beautiful, contributions to flight's Golden Age was America's Martin B-10 bomber classic airplane. This is despite the fact that the Golden Age of flight is more often remembered by film of a dazzling line of silver Hawker Furies of Number 1 Squadron, looping in close alignment at the annual RAF Hendon Display, or of an echeloned flight of darkly lethal Curtiss P-6Es in the eagle-taloned paint job of the 17th Pursuit Squadron.

The twin-engine B-10 prototype astounded United States Air Corps observers when it flashed across Wright Field, Ohio, in July 1932, at 197 miles per hour, faster than any fighter in service.

Awarded the prestigious Collier Trophy, the Martin B-10 would be the first American-designed bomber to enter combat. More importantly, however, the B-10 would revolutionize bomber aviation, creating a "bombers first" mindset within the Air Corps that would endure for decades. Mated to the revolutionary new Norden bombsight, the B-10 was the first aircraft to offer some of the capability that U.S. air power proponent Billy Mitchell had promised for so long.

The magnitude of the Martin's leap in performance can be understood only by comparing it with the Keystone bombers it replaced in active service.

The Keystones were of exactly the same configuration as World War I Gotha and Handley Page bombers: fabric-covered, fixed-gear, open-cockpit biplanes. The Martin B-10 was an all-metal, mid-wing cantilever monoplane with retractable landing gear and streamlined canopies over the crew-stations. At its nose it had a revolving turret, probably the first to reach operational service.

Production models of the Martin B-10 had the very high top speed of 213 mph, a maximum range of over 1200 miles, and a service ceiling of over 24,000 feet. Probably best suited to the task, the aircraft was pressed into service during the period in 1934 when the Army was dragooned into carrying the mail.

At the time the Martin B-10 classic airplane entered service, the Army was locked in a bitter turf war with the Navy, and it became important that the Air Corps demonstrate the range and flexibility of its bomber aircraft.

Lt. Colonel Henry "Hap" Arnold, later a five-star commander of the United States Army Air Forces, led a flight of ten B-10s on an 18,000-mile round-trip from Washington, D.C., to Fairbanks, Alaska. The trip demonstrated the potential of the B-10 and the vision of Arnold, and was closely followed by the press.

On the next page, learn how the Martin B-10 was used to prepare for World War II and see this classic airplane's specifications.

About 1930, when airmen and engineers at Wright Field wanted to develop a modern bomber, they approached Glenn L. Martin for a design. Martin came back with a typical twin-engine open-cockpit biplane. The Air Corps demurred, saying it wanted an all-metal monoplane. Martin reluctantly came back with an all-metal monoplane design that had traditional fixed landing gear and uncowled engines. The Air Corps again rejected the design, but this time sweetened the pie with a wing design of its own. This time Martin came back grudgingly with what was essentially the prototype of the B-10, but the Air Corps asked for and got a number of changes, including the closed cockpit.

The result was the sensational Martin B-10, which, as noted above, won the prestigious Collier Trophy in 1932. When he accepted the trophy Glenn L. Martin said, among other things, "I owe it all to my mother." The Wright Field engineers who had pleaded with him to build a modern bomber were not too happy. 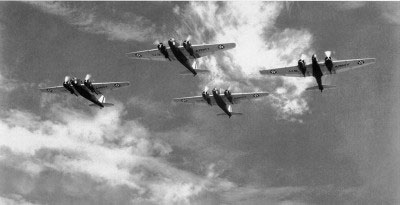