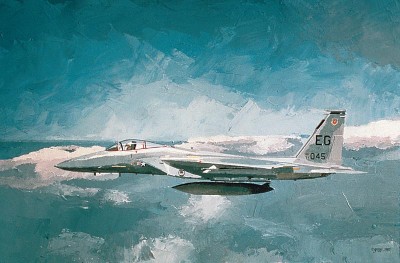 With developmental history going back to 1968, and a first flight in 1972, the McDonnell Douglas F-15 Eagle remains the most capable fighter in the USAF, and may be the finest aircraft of its type in the world. See more military jets pictures.
m

During the Vietnamese War, USAF fighter pilots and Air Force leaders were angered at the deficiencies of their equipment and training that resulted in a two-to-one or even one-to-one kill ratio, compared to the ten-to-one kill ratio of the Korean War.

They wanted a new fighter that would gain not air superiority but air dominance, and win its battles with few or no losses. It had to be fast and maneuverable, and have great visibility and long range. Armed with missiles and a gun, it was to have both beyond-visual-range (BVR) and close-in dogfight capability. It would make maximum use of the concept of "energy maneuverability" as advocated by then Major John Boyd.

The McDonnell Douglas F-15 Eagle, though designed as an air-superiority fighter, has also proved itself a devastating ground-attack aircraft. Weapons arrays are numerous and versatile.
m

A 1968 paper competition resulted in the selection of the McDonnell Douglas F-15 Eagle. It has been developed into the F-15C and F-15E Strike Eagle, the latter with a fantastic air-to-ground capability. It has distinguished itself in combat in the Persian Gulf War and, as part of the Israeli Air Force, in many conflicts with air forces of Arab nations.

Computer technology eliminated design bugs before a single piece of the McDonnell Douglas F-15 Eagle had been fabricated. The plane is lighter and more nimble than the Phantom it replaced; a power-to-weight ratio of 1.17:1 allows a potent rate of climb.
m

The McDonnell Douglas F-15 Eagle achieved its goals by a combination of inspired engineering and the advent of sophisticated on-board computers. Its large wings confer a tremendous maneuverability, and its powerful engines give it a remarkable climb rate. Pilots who fly it always feel like they have "good hands" because of its wonderful formation, in-flight refueling, and landing characteristics, which are enhanced by computers that continuously feed input to the control systems.

The F-15 is scheduled to be replaced by the Lockheed-Martin F-22 as the first-line air superiority fighter over the next ten years. However, updated versions of the Eagle will fly in multiple roles for many years to come.