Why are mercenaries used?

The reasons for using mercenaries have changed over the years. In ancient times, mercenaries were a necessity. Standing armies weren't available, so rulers had to look elsewhere for soldiers after they exhausted their supply of able-bodied citizens available to fight.

For example, the Hundred Years' War, which lasted from 1337 to 1453, took its toll on the English and French armies. As the prolonged war grew in dimension, so did the number of mercenaries. Edward of Woodstock, also known as the Black Prince, made good use of mercenaries to carry out a method of warfare known as chevauchée. In chevauchée, small groups of mounted soldiers stormed through a territory, burning and pillaging everything in their path. Chevauchée was very effective, and it made being a mercenary a lucrative profession. Soldiers from all over Europe flocked to France to get their share of the loot, which included both salary and whatever they could plunder. 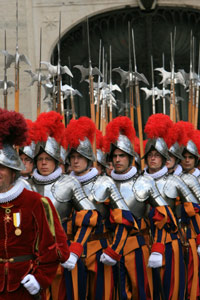 Getty Images
See those pikes? The Swiss Guards know how to use them.

­When the Hundred Years' War ended, the demand for mercenaries evaporated. Some remained in France and continued to wreak havoc there. Others ­became part of free companies, freelance soldiers who sold their services to various princes and dukes. Free companies would often specialize in certain forms of combat or in certain weapons. It became possible to hire, not just additional soldiers, but soldiers who possessed a specific skill.

Two mercenary armies amplified this trend in the 15th and 16th centuries. The first was the Swiss Guard, whose soldiers became so skilled with close-combat weapons, especially the spearlike pike, that warlords all over Europe began recruiting them for battle. The German Landsknechte also used the pike as their primary weapon, but they weren't one-dimensional. Other soldiers supported the pikemen with swords. And the Landsknechte were much more likely to use firearms, such as the arquebus, a musketlike weapon. These characteristics made the Landsknechte the dominant mercenary force until the development of political standing armies in the mid-17th century.

German mercenaries upheld their reputation as skilled warriors into the 18th century. Many came to America during the Revolutionary War to support the British, who simply didn't have enough troops. In fact, most of the soldiers the Americans fought weren't British; they were German.

In World War II, the German army took advantage of foreign-born soldiers. Known as freiwillige, or volunteers, these fighting men came largely from German-occupied countries to fight for the Third Reich. Technically, the freiwillige weren't mercenaries because, as volunteers, they were treated the same as other German soldiers. Their use, however, illustrates another reason why mercenaries were popular: By cultivating recruits internationally, a nation could capitalize quickly on all available manpower to build an even larger fighting force.

After World War II, the use of mercenaries declined. Many went to work in Third World countries, especially in Africa, where they were hired both by government and antigovernment groups. Mercenaries, especially those from Europe, participated in various postcolonial wars across the African continent -- in Congo, Angola and Sierra Leone. They were hired to train soldiers, to advise military leaders and to actively engage rebel forces. Many prominent mercenaries were captured and either executed or imprisoned during this time.

­As a result of the co­nflict in Africa and the unsavory mercenary activity it inspired, the international community strongly discouraged the use of mercenaries. Countries continued to hire foreign soldiers, but they exerted much more control. They also limited the activities of these soldiers to supporting roles only, freeing the regular army to focus on dangerous or mission-critical activities. Today, several companies exist to provide this new breed of mercenary. They are known as private military companies, or PMCs. On the next page, we'll examine PMCs more closely.