Life of a Mercenary: Soldier in the French Foreign Legion

There's a popular notion that mercenaries participate in grand adventures all over the world and get paid handsomely to do it. And yet being a professional soldier, like any career, has its positives and negatives. To understand what it's like to be a modern mercenary, we need to consider the two different kinds: the soldier and the contractor. A member of the French Foreign Legion should serve as a good example of the former; a security contractor of a private military company, such as Blackwater Worldwide, should serve as an example of the latter. Let's start with life as a Legionnaire.

In its early days, the French Foreign Legion tended to recruit down-and-out individuals. Many existed on the fringes of society or were criminals who saw the Legion as a last resort. Today, this can still apply to some recruits, but the majority are upstanding citizens. Some have even served as soldiers in traditional armies. 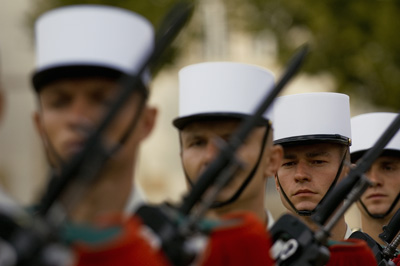 Getty Images
Are you a Francophile with a dodgy past? Why not join the French Foreign Legion?

There are no recruiting offices located outside of France, so interested citizens from other countries must to travel to one of several Legion information centers in mainland France. They make this trip at their own risk, because there are no guarantees that the Legion will accept them. You might think this would discourage foreign-born volunteers, but it doesn't. The approximately 8,000 Legionnaires hail from 136 countries, including France itself [source: French Foreign Legion].

After receiving some basic information, all recruits report to a Legion recruitment center for preselection. The preselection process includes an initial medical checkup and a "confirmation of motivation" to ensure recruits are serious about joining. Recruits who are preselected proceed to Aubagne, France, for formal selection. In Aubagne, recruits receive a more thorough medical examination and additional motivation questions. They must also complete a series of logic, sports and personality tests to determine their strengths and skills. Those who are selected must sign a five-year contract of service.

Basic training lasts 15 weeks and takes place in Castelnaudary, a country town located in southern France. Training is meant to introduce new Legionnaires to military life, to their comrades and to the French language. At the end of basic training, Legionnaires receive their képi blanc, the traditional white-peaked hat of the Legion, as well as their assignments.

After basic training, new soldiers split off into 11 regiments. These regiments are located throughout France and in other countries, such as Afghanistan, Chad and the Ivory Coast. Legionnaires may work side by side with regular French military forces, with French police and with soldiers of other nations. For example, they were deployed with U.S. military forces in Somalia in 1992 and have been part of peacekeeping missions in Kosovo, Rwanda, Cambodia and Afghanistan. 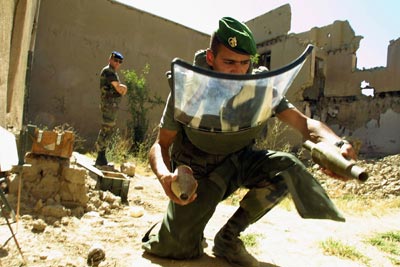 Getty Images
Soldiers from the French Foreign Legion were part of a 2002 peacekeeping mission in Kabul, Afghanistan. These soldiers are clearing a village of explosives.

Legionnaires train with the standard weapons and equipment of the French infantry, including grenades, 9 mm automatic pistols and rocket launchers. The primary weapon is the Famas automatic assault rifle. Legionnaires have carried this weapon into numerous battles over the years, and many have died in combat. Since 1831, more than 35,000 Legionnaires have been killed in battle or during service to the organization [source: Moore].

­That's a glimpse inside the life of a more traditional mercenary. Now let's find out what life is like working for a private military company.