Mercenaries can give an army a huge advantage, but they can also be a liability. When contemplating whether to use mercenaries, leaders must consider a full range of economic, political and military risks. Let's look at these in detail.

Conventional wisdom says that mercenaries should save governments money, but that's not always the case. Hiring high-quality soldiers that rival regular military forces can be expensive, as the U.S. is finding out in Iraq. According to the Congressional Budget Office, the U.S. government has awarded contracts in Iraq worth about $85 billion from 2003 to 2007, or 20 percent of the total costs of the war [source: Risen]. However, governments that skimp often regret it. History is full of stories about mercenaries who desert the battlefield because of their employers' unwillingness or inability to pay. 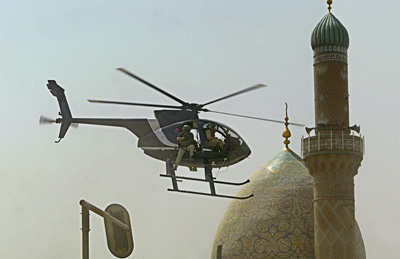 AFP/Getty Images
The private military company Blackwater has had a huge presence in Iraq since the U.S. invaded in 2003. This Blackwater helicopter circles above a roadside bomb in Baghdad that targeted a convoy of Western security guards.

Then there's the related question of loyalty. Can foreign soldiers be trusted explicitly? A well-known story from the 14th century describes how the almogávares, Spanish frontiersmen who served as mercenaries, turned on the Byzantine leaders who hired them. After helping to defeat the Turks, the almogávares attacked the Byzantine town of Magnesia and then continued to ravage the area for two years. Even if such wholesale disloyalty is uncommon, desertion isn't.

Remember mercenaries are beholden to the foreign government or corporation that pays for their services. As a result, the mercenaries may not support the same goals as the homeland citizenry. In addition, the public sees the sacrifice of a soldier fighting for his or her country as honorable. Many people don't feel the same way about a mercenary who fights, not for a cause, but for a paycheck.

The biggest risks are probably military in nature. Mercenaries generally fight next to soldiers of the regular army, so there needs to be some integration and coordination. But often mercenaries don't readily share information with troops or with other mercenary armies that share the field. This communication breakdown can obviously have serious consequences during a battle.

Finally, the presence of high-paid mercenaries can weaken a country's military force. Why? First, retention rates are lowered as quality soldiers leave the armed forces for more lucrative positions as mercenaries. Second, as paid soldiers assume responsibility for more tasks, the connection between military professionalism and public service can be eroded.

Because of these risks, some countries have argued for a general prohibition on mercenary activities. But critics argue that outlawing mercenaries will do more harm than good. After all, mercenaries, when promptly paid and governed by strict, clear guidelines, are effective soldiers that can benefit the military in many ways.

March on over to the next page for related stories on stuff that might interest you, like military snipers and the Green Berets.