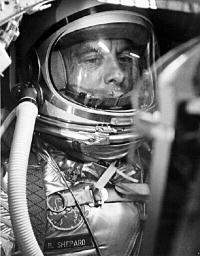 In this edition of HowStuffWorks, we'll delve into the individual missions of Project Mercury, starting with Shepard's Freedom 7.

On May 5, 1961, Alan Shepard climbed aboard his Mercury spacecraft, called Freedom 7. His mission was to fly into outer space and return safely in a sub-orbital flight that would last about 15 minutes. There were numerous delays in the countdown, and Shepard was on the pad for hours. Finally, at 9:43 a.m., Alan Shepard was launched into outer space. Shepard reached an altitude of 116 miles (187 km) and landed 303 mi (488 km) down-range from Cape Canaveral, where he was recovered by the aircraft carrier Lake Champlain. He reached a peak velocity of 5,134 miles per hour (8,260 kph) and experienced a force as high as 11 Gs (11 times the acceleration due to gravity) upon re-entry. The flight lasted 15 minutes and 28 seconds. Unlike Gagarin, Shepard was able to maneuver the craft during flight. Shepard's historic flight launched the U.S. space program, ultimately, to the moon. Alan Shepard was later grounded due to an inner-ear disorder. He worked in the Astronaut Office for many years before having surgery to correct his ear problem. He moved on to command the Apollo-14 mission and walk on the moon. He was the only Mercury astronaut to go to the moon, as well as the only man (to this day) to golf on the moon. Alan Shepard died in 1998.

Shepard's groundbreaking flight was followed by another suborbital flight by Gus Grissom and four orbital flights by Glenn, Carpenter, Schirra and Cooper.

On July 21, 1961, Gus Grissom became the second American in outer space. His flight was a sub-orbital flight like Shepard's. Grissom's Mercury capsule, called Liberty Bell 7. Grissom's flight lasted 15 minutes and 37 seconds. He reached an altitude of 118 mi (190 km), experienced 5 seconds of weightlessness and landed 302 mi (486 km) down-range from Cape Canaveral. During recovery, the explosive hatch on Liberty Bell 7 blew unexpectedly, before the helicopter was connected to the capsule. Grissom escaped as the capsule flooded with sea water. He was recovered, but the capsule sank to the bottom. The ensuing investigation into the hatch incident sparked controversy about Grissom's conduct, and the reason for the hatch malfunction was never determined. Recently, Liberty Bell 7 was located and recovered from the sea floor. After extensive examination and restoration, it may go on public display.

Gus Grissom later commanded the first Gemini mission, which took place while Alan Shepard was grounded. Grissom died in the Apollo 1 fire in January 1967, along with astronauts Ed White and Roger Chaffee.

America had shown that it could place a man in space. Now, it was time to place a man in orbit. However, the Soviets orbited cosmonaut Gherman Titov for an entire day on August 6, 1961, so again, NASA had to catch up with the Soviets. To place a man in orbit, the Atlas launch vehicle had to be used, and John Glenn was the man who would ride it. After numerous delays, John Glenn was launched into orbit aboard Friendship 7 on February 20, 1962. He orbited the Earth at an altitude of 162 by 100 mi (260 by 161 km) at an inclination of 32.5 degrees. Glenn traveled at a velocity of 17,544 mph (28,228 kph). At this speed, he circled the Earth once every 90 minutes. Glenn was originally scheduled for nine orbits, but when a warning light indicated that his heat shield was displaced, NASA officials decided to bring him down after only three orbits (it later turned out that the warning light had malfunctioned). The retro-pack, which was usually jettisoned prior to re-entry, was kept on the capsule to hold the heat shield in place. There were tense moments as Glenn re-entered the atmosphere, but he splashed down successfully 800 mi (1,287 km) southeast of Bermuda. His flight lasted 4 hours and 55 minutes, and he experienced 4 hours and 48 minutes of weightlessness.

John Glenn did not fly on any of the missions immediately following Project Mercury, by order of President John F. Kennedy (who did not want a national hero potentially dying on a subsequent space mission). Glenn retired from NASA and became a U.S. Senator. However, in 1998, he returned to space aboard the space shuttle to conduct experiments on the effects of spaceflight on aging.

After Glenn's flight, Deke Slayton was scheduled to go up. However, Slayton developed an abnormal heart rhythm and was grounded (he became the head of the Astronaut Office, flew aboard the Apollo-Soyuz mission in 1975, retired from NASA in 1982 and died in 1993). Astronaut Scott Carpenter replaced him. On May 24, 1962, Carpenter was launched into Earth orbit aboard the Aurora 7, at an altitude and speed similar to those of Glenn's flight. Carpenter attempted to complete several scientific experiments during the flight, including observing flares fired from Earth and deploying a tethered balloon to measure the atmospheric drag in orbit. The balloon failed to deploy. Carpenter expended excess fuel during his mission and had to return after only three orbits. The re-entry occurred with extremely depleted fuel supplies, and Carpenter landed more than 250 miles (400 km) off-course. It took 6 hours for the recovery teams to intercept him.

Carpenter never flew another mission. He was passionate about oceans and participated in the U.S. Navy's Sealab underwater habitat project.

On October 3, 1962, Walter Schirra became the third American to orbit the Earth. He completed six orbits in Sigma 7, for a total flight time of 9 hours and 13 minutes. Schirra carefully managed fuel and electricity, paving the way for long-duration flights. His flight was considered a textbook success. He re-entered the atmosphere and splashed down 4.5 mi (7.2 km) from the aircraft carrier USS Kearsarge, about 275 mi (442 km) northeast of Midway Island in the Pacific Ocean.

Schirra later commanded a Gemini mission with Thomas Stafford. His Gemini 6 capsule met up with Gemini 7 in orbit, showing that two spacecraft could meet and fly in formation in orbit. In October 1968, Schirra commanded the Apollo 7 mission, the first in-orbit test of the redesigned Apollo spacecraft following the Apollo 1 fire. Schirra retired from NASA after Apollo 7.

The final Mercury mission occurred on May 15, 1963. Astronaut Gordon Cooper was launched in Faith 7 on an Atlas booster into Earth orbit. Cooper spent one day, 10 hours and 19 minutes in space. He orbited the Earth 22.5 times and experienced 34 hours and 3 minutes of weightlessness. He logged more hours in space than all of the previous Mercury astronauts combined. Cooper was the first astronaut to sleep in space and proved that long-duration missions were possible. During the flight, his cooling system malfunctioned, and he lost several pounds by sweating. Cooper's recovery signaled the end of Project Mercury. He was the last American to go into space alone.

Cooper later commanded Gemini 5 with astronaut Pete Conrad. They orbited the Earth for eight days. Cooper was backup commander for Gemini 12 and Apollo 10. He was to be the commander of Apollo 13, but was replaced by Alan Shepard (who was then replaced by James Lovell). Cooper never flew in space after Gemini 5. He became Chief of Operations for Skylab before resigning from NASA. Cooper died, at the age of 77, on October 4, 2004.

The men and missions of Project Mercury established that America could place a person in orbit, that he could survive in space and that he could return successfully. Project Mercury established a foothold for America in the space race and paved the way for Projects Gemini and Apollo. As of May 2001, Mercury astronauts Glenn, Carpenter, Schirra, and Cooper are still alive, although retired from space endeavors. The pioneering contributions of these men to aviation and space exploration will always be remembered.

The Hitomi Satellite Briefly Glimpsed the Universe, Then Died — What Happened?
Where the Most UFO Sightings Are
A Brief History of Booze in Space