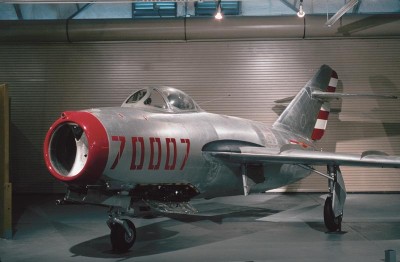 The Mikoyan-Guryevich MiG-15 was a literal bolt from the blue, giving American fliers in Korea more than a little hell. Working in the Americans' favor was the 15's graceless, even dangerous, handing during exceptionally quick maneuvers.

Although the Mikoyan-Guryevich MiG-15 had been demon­strated at the Tushino, Russia, airshow, the United States was surprised by the appearance of the Soviet airplane in combat during the Korean War.

The development of the Mikoyan-Guryevich MiG-15 was very unusual in that it was predicated upon the Russians' acquisition of the Rolls-Royce Nene jet engine. In a brilliant diplomatic coup -- or an example of treachery at the top -- the British government agreed to supply 55 of the engines to the Soviet Union, giving that Commu­nist giant an unprecedented boost in engine technology.

Full-scale production of the Mikoyan-Guryevich MiG-15 was launched immediately after the first flight of the prototype, which occurred on December 30, 1947. Some 12,000 versions of the aircraft would be built, many of them in Soviet satellite countries, and they would serve with more than 40 air forces.

The MiG-15 made its first combat appearance, over Korea, in November of 1950. For the next three years, the MiGs, most often flown by Soviet pilots, would contest the United States Air Force for air superiority over Korea.

The Mikoyan-Guryevich MiG-15 proved to have a superb perfor­mance, better in several areas than its principal opponent, the North American F-86 Sabre. The MiG-15 had a better altitude capability, a better rate of climb, and at some altitudes was faster than the Sabre. It was a much simpler aircraft, however, lacking the redundant systems of the Sabre, and it was a poor gun platform, tending to "snake" (move from side to side) at high speeds.

The Mikoyan-Guryevich MiG-15 shook the United States aviation industry out of the somewhat complacent state into which it had fallen after World War II. Regardless, the Soviets' follow-on MiG-17, MiG-19, and MiG-21 would prove to be capable opponents during the Vietnam War.