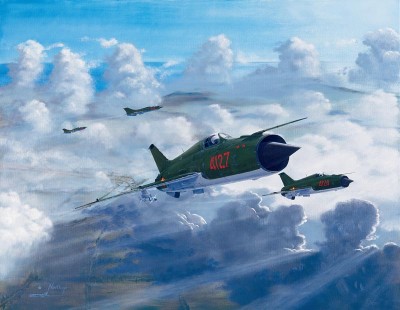 If the McDonnell Douglas F-4 Phantom II was the premier Western fighter of the 1970s, then the Mikoyan-Guryevich MiG-21 was its Soviet equivalent. Some 11,000 MiG-21s were built, and it served in many versions in almost 40 air forces around the world.

Designed as an all-weather interceptor, the Mikoyan-Guryevich MiG-21 was the first delta-wing aircraft to emerge from the MiG design bureau. It was small, fast, and quite maneuverable at certain altitudes, and it proved such a challenge for the F-4s that the United States at last adopted a "dissimilar aircraft" training program, using Northrop F-5s to simulate the MiGs.

The Mikoyan-Guryevich MiG-21 operated, per Soviet doctrine, under close ground control in Vietnam, and its preferred tactic was to follow a formation of American aircraft low and from the rear. It would gather "smash" (speed and energy) and pop up to fire its Atoll heat-seeking missile, then turn to dive away to the sanctuary of its base. These tactics were considered successful if they did nothing more than force the American strike force to jettison its bombs prematurely.

The MiGs were maneuverable in turning flight, although in a sustained turn they lost speed rapidly. Their biggest disadvantage was limited visibility to the rear, and many a MiG fell prey to a Phantom that sneaked up on it from the rear quarter.

The basic Mikoyan-Guryevich MiG-21 was very adaptable, and it appeared in many variants equipped with a wide variety of armament and suitable for many missions, including reconnaissance and ground attack. It was built under license in Czechoslovakia, India, and China, and served in the latter country as a tool to teach the Chinese the art of modern aircraft manufacture.

As with most Soviet aircraft, the MiG-21 was sophisticated where it had to be, and rough, even primitive, where it did not matter aerodynamically. In many ways, the MiG-21 epitomizes the earnest, effective Soviet approach to combat aircraft design.