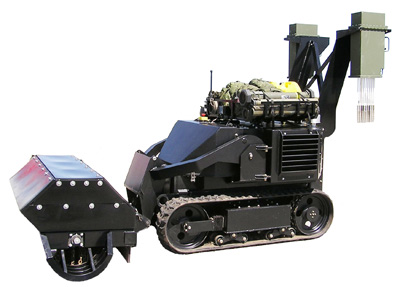 The military doesn't use the kinds of humanoid assault robots we've come to expect from films like "The Terminator." Whether or not a robot looks like a human doesn't matter much in today's military applications. Robots come in many shapes and sizes, and although there isn't really any single definition of a robot, one common definition is this: a machine that is controlled, in whole or in part, by an onboard computer. Robots also have sensors that allow them to get information from their surroundings, some form of locomotion and a power source.

If military robots aren't shaped like humans, what shapes do they come in? It depends on the kinds of jobs the robot is built to carry out. Robots that have to negotiate difficult terrain use tank treads. Flying robots look pretty much like small airplanes. Some robots are the size of trucks, and they look pretty much like trucks or bulldozers. Other, smaller robots have a very low profile to allow for great maneuverability.

Today's military robots don't do a whole lot on their own. Their computer brains aren't very sophisticated in terms of artificial intelligence (AI). AI is a form of computer program that allows the robot to process information and make some decisions on its own. Instead of independent AI, most military robots are remote-controlled by human operators. The military doesn't usually use the term "robot" -- it calls them unmanned ground vehicles (UGVs) or unmanned aerial vehicles (UAVs).

One other important thing to remember about military robots: Robots designed to help soldiers on the battlefield have to be carried onto the battlefield by those soldiers. For that reason, robot builders try to design "man-portable" designs. A man-portable robot can be carried by a single soldier, usually in a special backpack.

Next, we'll find out why smaller is sometimes better when it comes to military robots.

Think you're an expert on military robots? Test your knowledge with this quiz from the American Heroes Channel: