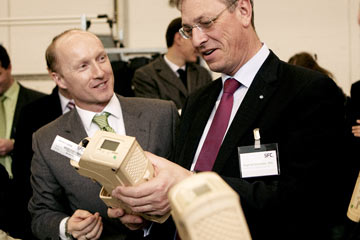 Modern soldiers these days got gear, and all that gear requires juice. Sometimes power outlets aren't so easy to find in the battlefield.
Courtesy: SFC Smart Fuel Cell AG

You've spent days trekking through unfamiliar territory on a reconnaissance mission, carrying the latest military-grade technology every step of the way. Your scouting platoon comes to a halt and you take the opportunity to pull out your laptop and send updated coordinates back to the base. Just one problem; the battery's dead. No need to panic -- you're carrying a Jenny fuel cell, one of several fuel cells specifically designed by Munich-based SFC Smart Fuel Cell for military use. Using the quiet, portable power that the Jenny fuel cell provides, you're able to recharge your laptop's battery and get to work.

Fuel cells are similar to batteries in a lot of ways, using chemical reactions to produce electrical energy. Unlike batteries, however, fuel cells don't go dead; as long as a fuel source is available, a fuel cell can continue to produce energy.

The idea to use fuel cells for military applications is hardly a new one. Articles exploring the subject go back to the 1950s, but both military and fuel cell technology have advanced significantly since then. Modern soldiers use an amazing array of electrical equipment to do their jobs. Night vision goggles, global positioning systems and computers are just some of the power-hungry devices soldiers carry with them in the field, and finding reliable, portable power for those devices has become an important issue. Batteries for those gadgets can add 20 pounds (9 kilograms) or more to a soldier's load [source: MSNBC]. Fortunately, fuel cell technology has come a long way as well, and SFC is one of the companies pushing the technology forward.

We've already touched on some of the different military uses for fuel cells, and the company Smart Fuel Cells (SFC) offers different fuel cells for different applications. The most portable option is the Jenny, which weighs about a pound (0.45 kilograms) and is designed to be carried by a soldier for long periods of time. For more power-intensive operations, SFC has created a larger fuel cell, named the Emily, designed to be carried by vehicles. Finally, SFC offers an even larger fuel cell, named the FC 250, for more permanent field installations. All three options are constructed with rugged casings, function in sweltering conditions and, most important, run on methanol fuel cartridges.

Of course, methanol also has some downsides. For one thing, it's not as readily available as some other types of fuel. The military commonly uses a kerosene-based fuel called JP-8, for instance, though fuel cells using JP-8 currently produce dangerous emissions, making methanol the safer, if not cheaper, choice. Methanol fuel cells are also less efficient than some other fuel cell technologies like polymer exchange membrane fuel cells (PEMFCs), though they still offer better power density than alternatives like lead acid batteries.

Despite those drawbacks, the Smart Fuel Cell is a convenient way for soldiers to access power in the field. Soldiers simply plug a rechargeable battery into the Smart Fuel Cell and the fuel cell monitors the charging process, shutting off whenever it's not needed. Soldiers can then power their devices using the rechargeable batteries. If a fuel cell runs out of juice, a soldier simply replaces the fuel cartridge. A single soldier can replace the cartridge on even the largest fuel cells offered by SFC, making Smart Fuel Cell operation a pretty painless process. Researchers from companies like Adaptive Materials Inc. and laboratories like the Pacific Northwest National Laboratory are continually making fuel cells lighter, more powerful and more flexible, so keep an eye out for new innovations and applications for fuel cells moving forward [sources: MSNBC, Hutchinson].

Fuel cells are proving to be a great way to get energy to remote locations, but batteries still play a crucial role in powering soldiers' devices. And like fuel cells, batteries are constantly being improved. One example is the BA-5390, a 3-pound (1.4-kilogram) rechargeable battery that offers 60 percent more capacity than older units (though the older units are a bit lighter). That added capacity ultimately translates into less weight for soldiers; a mission that previously required seven 2.25-pound (1-kilogram) batteries now requires just three BA-5390s, a 6-pound (nearly 3-kilogram) weight reduction [source: Thompson].