Browse the article Are there military space stations out there? 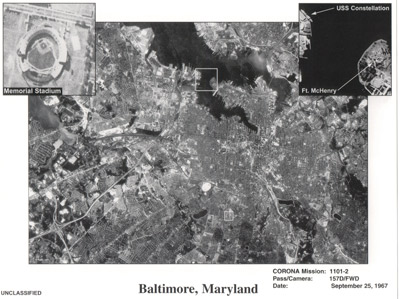 The idea of space bases piloted by secret military operatives sounds like something out of the latest bestselling thriller. Yet just a few decades ago, such military space stations weren't so far from reality. In the 1950s and 60s, gove­rnment officials were looking to space to protect America's interests on the ground, and they had some pretty far-out ideas about how to create a military presence in the sky.

Military space stations grew out of America's space race -- and the Cold War -- with the Soviets. Spacecraft that would ultimately propel us to the moon were originally just one part of the space program. The other part involved space stations -- structures designed to house researchers.

One of the earliest military incarnations in space was a spy satellite mission launched by President Eisenhower. In 1958, the president authorized work to begin on Corona, a satellite that could take pictures of the Earth from space. During the 1960s and early 70s, Corona made more than 100 flights -- among them, a mission to pinpoint the sight of China's first nuclear test explosion.

In 1957, the government launched a program to develop a space plane called the Dyna-Soar (short for "dynamic ascent" and "soaring flight"). The purpose of the hypersonic, rocket-launched spacecraft was to carry out manned experiments in space, aim missiles at targets on Earth and gather intelligence.

Ultimately, the Dyna-Soar never came to fruition. But just as Secretary of Defense Robert McNamara was announcing its demise in 1963, the idea for the Manned Orbiting Laboratory (MOL) was born. This orbiting space platform, which would be manned by military astronauts, would give the Air Force the perfect vehicle for conducting surveillance of the Soviet Union and China. It would take satellite photos, study life in space and perform other duties which are, to this day, classified. Yet by 1969, soaring costs (an estimated $1.4 billion in total) caused the government to scrap the MOL project before it launched.

The first Soviet military station to launch was the Salyut-3, which took off on June 25, 1974. Two years later, on June 22, 1976, a second military space station, Salyut-5, launched. It carried a high-resolution camera that was believed to be used for military reconnaissance work, though what exactly the Salyut operation accomplished is a matter of speculation. Three spacecraft flew to the Salyut-5 over the next few years, but the missions were plagued with technical problems and the station was ultimately pulled from orbit in August 1977.

Where did military applications for space stations go after the 1970s? Find out next. 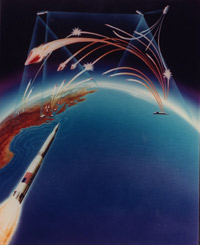 ­In the 1980s, as NASA was just gearing up for the development of an international space station, the Pentagon was already eyeing the potential of a similar station for military operations. Such technology would complement the programs of the Strategic Defense Initiative (Star Wars). Military officials had the idea that a military space station could fuel Star Wars weapons, serve as a post to launch reconnaissance and battle missions, and act as a service station for space weapons. The military figured that it would be easier, and less expensive, to accomplish these tasks in space than on the ground.

At the time, a report by the American Institute of Aeronautics and Astronautics proposed that $1.8 million be spent to enhance the technology needed to develop a military spac­e station. They recommended the development of radiation protection, high-pressure suits for military astronauts, as well as shields and other defenses to protect against the laser attacks and nuclear bombs they anticipated would threaten the station. Not everyone in the government was onboard with the idea, though. Congressman Norman Y. Mineta introduced a bill in 1987 that would prohibit military use of the space station, arguing that "NASA's credibility is at risk" [source: New York Times].

The idea of a military space station as it was originally conceived never became a reality. Today, the International Space Station is fully operational, but for civilian, not military purposes. Though the Pentagon still looks to space, its interests lie more in protecting galactic assets from attack (especially by terrorists), rather than in launching military operations.

To learn more about space stations, the Cold War and the space race, spy the links on the next page.

On March 23, 1983, President Ronald Reagan gave a now famous speech outlining plans for a new, space-based missile defense system. He said the shield would protect the U.S. from incoming nuclear weapons, "just as a roof protects a family from the rain" [source: Bulletin of the Atomic Scientists]. The Strategic Defense Initiative, or "," as it was nicknamed, would be equipped with computers, sensors, and weapons that could intercept enemy missiles. The plan was highly controversial -- and very expensive. It was slated to cost an estimated $30 billion before it was scrapped in 1993.­