How to Become an Army Pharmacy Technician 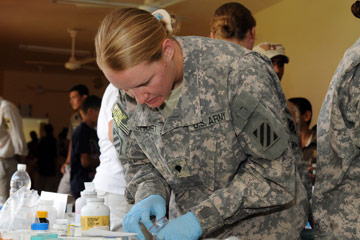 Close to 1.5 million Americans serve in the United States Armed Forces, which includes the Army, Navy, Marine Corps, Air Force and Coast Guard [source: Department of Defense]. Such an enormous operation requires many behind-the-scenes jobs to maintain so many people on a daily basis. One large part of this well-oiled machine is the Army Medical Department.

The U.S. Army maintains its own medical system, complete with hospitals, doctors, nurses, medics and ambulances, which all work together to keep American troops healthy and ready to defend the country. The Army Medical Department also cares for veterans and the families of soldiers, both stateside and on bases throughout the world. Just like civilian hospitals, Army hospitals run their own pharmacies to fill prescriptions for patients and answer questions about medications.

Army pharmacies are run primarily by licensed pharmacists (who have officer status in the Army), but they also have pharmacy technicians, or pharmacy assistants, who help with the day-to-day operations. Pharmacy techs are responsible for helping mix and fill prescriptions, maintain records, interact with customers and perform other administrative duties. There are currently more than 600 pharmacy technicians serving in the U.S. Army [source: Gerbino].

One benefit of working as a pharmacy technician for the Army is that it's a job that can easily transfer to the civilian job market. Army pharmacies are run pretty much like pharmacies everywhere else, so not only will you have the basic skills to work as a pharmacy assistant just about anywhere, but you'll also have experience, which is an invaluable asset in a competitive job market.

Does working in an Army pharmacy sound like a job you're interested in? On the next page, we'll share tips for how to join the program, some benefits of working for the Army and a few of the qualities that make a good pharmacy technician.

You don't need to have any previous experience or certification to become a pharmacy technician for the Army. The Army gives you all the training you'll need.

After basic training, you'll participate in a 19-week training course at the U.S. Army Academy of Health Sciences at Fort Sam Houston in San Antonio, Texas. There, you'll learn the skills you'll need to operate as a pharmacy technician. This includes knowing the types of drugs and their uses, drug interactions, how to mix and fill prescriptions, and general pharmacy laws and rules. You'll also become familiar with the expectations of your job as a pharmacy technician for the Army.

Like pharmacy techs in the civilian world, it's helpful to have an interest and skill in math, biology, chemistry and anatomy. Excellent organizational skills and an attention to detail are a must for anyone working in a pharmacy, since mixed-up medications can be very dangerous for patients. Good communication skills and computer skills are also important.

Civilian pharmacy techs earn a median pay of $13.92 per hour, or around $29,000 per year, but pay can vary depending on where you work and your training level [source: U.S. Dept. of Labor]. As an Army pharmacy tech, your pay scale is based on active duty soldier pay. That means the amount you earn goes up as your rank and time of service increases. New recruits start at around $17,611 per year, but keep in mind that the military gives you bonuses (including a signing bonus of up to $40,000), free health care, tax incentives and living allowances (if you live on base, your housing and food are free) [source: U.S. Army]. With many of your living expenses paid, what may seem like a lower salary than in the civilian field can actually add up to be a lot more. Plus, your salary is guaranteed to increase over time.

If you want to know more about the U.S. Army and careers in the armed forces, take a look at the links on the next page.

History of the Pharmacy Tech Program

The original Army pharmacy technician training program was nine months long. But during World War II, the demand for pharmacy techs grew so much that the course was shortened to just three months [source: Worthen].

U.S. Air Force Sets Speed Record With Magnetically Levitating Rocket Sled
Why do I have to join the French Foreign Legion under an assumed name?
Does Army experience help your civilian career?