How the Partnership for Youth Success Program Works 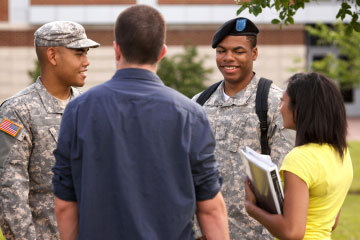 How can does a soldier plan for his or her career?
©iStockphoto.com/carlofranco

In the midst of difficult economic times with soaring unemployment rates, the opportunity to get a guaranteed interview with a company of your choice is tempting, indeed. That's why the U.S. Army uses this hook to help recruit new enlistments.

While youth facing graduation may feel that it's an ideal time to join the military and spend some time serving their country, the ambitious know it's also a critical point to start preparing for a long-term career. These paths don't have to be mutually exclusive. That's why the Army started the Partnership for Youth Success (PaYS) program for regular Army soldiers, Army reserve soldiers and ROTC cadets. Another stated goal of the PaYS program is to reconnect the Army with America and its business community.

Specifically, the PaYS program helps give soldiers a leg up for securing a job after they've completed their military service. Through the PaYS program, the Army seeks to establish partnerships with corporations, companies and even public sector employers. These organizations agree to give interviews to particular soldiers upon their release from service if they meet the qualifications for the positions.

So, what do the partnering organizations get for their participation in the program? Many want to help in the effort to encourage enlistment. But companies all stand to benefit from the partnership as they hope to secure a source of qualified candidates for new positions. The organizations that join recognize the value of Army training in the context of the work that soldiers might perform.

We spoke with Matt Luther, the National Military Recruiting Director at Cintas, who says that his company appreciates the work ethic of soldiers coming through the PaYS program. They have excellent customer service skills because of their military experience with people from diverse backgrounds. And, as Luther points out, a commitment to safety procedures is ingrained in soldiers, which helps corporations avoid liability problems.

Besides, by granting interviews to these soldiers, companies are by no means guaranteeing jobs. The Army can get you in the door, but after that, it's up to you to dazzle the interviewers.