If you hold your thumb out at arm's length and then alternately open and close each eye while looking at it, you will see that your thumb apparently moves or shifts against the background. This shift is called a parallax shift. As you move your thumb in closer to your nose and repeat the process, you should notice that the shift gets bigger. Astronomers can use this same technique to measure distances to the stars. As the Earth orbits the sun, a given star's position changes against the background of other stars. By comparing photographs of the star at six-month intervals, astronomers can measure the degree of the shift and obtain the angle of parallax (half the parallax shift = theta or Θ). By knowing the angle of parallax and the radius of the Earth’s orbit (R), astronomers can calculate the distance to the star (D) using trigonometry: D = R x cotangent (theta) or D = RCotΘ. Parallax measurements are reliable for stars with distances less than or equal to 50 parsecs. For distances greater than this, astronomers must find variable star markers and use the luminosity-distance relationships (see next page). 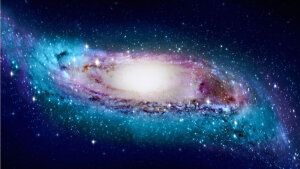