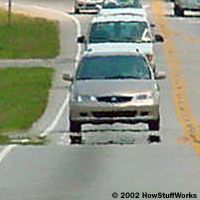 In cartoons, mirages are elaborate visions of tropical oases, complete with palm trees and ornate swimming pools. They spring up suddenly in the hot desert, and then disappear just as the sun-addled hero is about to dive in. This sort of illusion is complete fiction, of course, but mirages do really exist, and they can make you see water where there isn't any. In hot areas, you see them along the highway all the time.

A dangerous time to see a mirage would be during a blistering downhill run at one of the world’s best sandboarding destinations. Check out the sandboarding article, video and images at Discovery’s Fearless Planet to learn more.

In this edition of HowStuffWorks, we'll examine the simple scientific principles behind this strange phenomenon. We'll also look at some less common mirages, such as hovering phantom islands and ships. 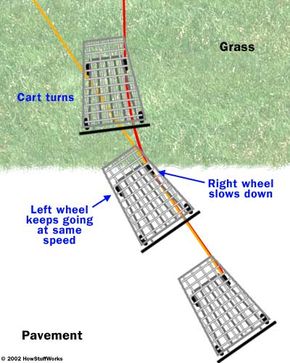 In the most common type of mirage, an object appears to be reflected as if there were a pool of water on the ground. This phenomenon is caused by light refraction -- the bending of light beams. Light bends when it passes from one medium into another -- from air to water, for example, or even from colder air to warmer air. This may seem like a strange idea, but it's really very simple.

Imagine you're pushing a shopping cart across a parking lot. If you're exerting a constant force, the cart's speed depends on the medium it's traveling on -- in this case, the parking lot's paved surface. What happens when you push the shopping cart out of the parking lot, onto a grassy area? If you push it straight onto the grass, it will simply slow down. The grass medium offers more resistance, so it takes more energy to move the shopping cart.

But if you push the cart onto the grass at an angle, something else happens. If the right wheel hits the grass first, it will slow down while the left wheel is still on the pavement. Because the left wheel is briefly moving more quickly than the right wheel, the shopping cart will turn to the right as it moves onto the grass. Similarly, if you move from a grassy area to a paved area, one wheel will speed up before the other and the cart will turn.

A light wave works in a similar way. Its speed depends on what sort of medium it's passing through. In the vacuum of space, light travels at top speed because there isn't any matter slowing it down. It has a harder time moving through an area filled with matter, such as the Earth's gaseous atmosphere, so it moves more slowly. As it moves from one medium to another at an angle, one part of the wave changes speed an instant before the other, and the light turns.

In the next section, we'll find out how this phenomenon creates mirages. 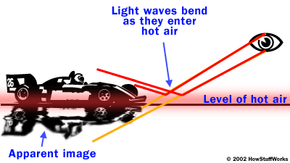 Mirages occur when there is a rapid shift in air density in the atmosphere -- when the air at one level is a lot hotter than the air at an adjoining level (check out this page to find out why hot air is less dense than cold air).

This commonly occurs on summer days, when an asphalt road that has been baking in the sun heats the air directly above it, creating a sharp shift in air density levels near the ground. As light passes between the different levels, it bends, creating mirages.

Normally, sunlight bouncing off an object (let's say a car) reflects in all directions. You see the car when your eyes detect this light. On an overcast day, you only see the light that bounces off the car straight toward you. This is how you see things most of the time.

On a sunnier day, the light heading straight toward you acts just like it usually does -- it doesn't move through different layers of air density, so it doesn't bend much. But some of the light that would normally hit the ground actually bends in midair because it moves from the cooler, denser air level into the hotter, less dense air right above the ground. As you can see in the diagram below, this produces an interesting effect.

The lower part of the light wave passes between the layers first, so it speeds up an instant before the upper part. The light that would ordinarily go straight to the ground bends upward and travels to your eyes. The effect is that you see the image of the car twice: once on top of the road, and once in the road surface. The light from the lower part of the car bends farther upward than the light from the top of the car, so the mirage image looks like a reflection. Your brain assumes that the light is traveling in a straight line, so it seems like there's a mirror image beneath the normal image. This mirage looks just like a puddle of water on the road because, like a puddle of water, it's reflecting what's above it. This sort of mirage is called an inferior mirage because it appears below the horizon.

Superior mirages are mirages that form above the horizon. This occurs when there is a cooler level of air lower than a warmer level of air, typically over icy landscapes or very cold water. This mirage causes you to see a scene much higher than it should be. For example, you might see a mass of land or a boat floating in midair. This situation might also distort images, making a boat seem much taller than it actually is.

You can see a similar optical illusion any day when the sky is clear. As light from the sun enters our atmosphere, it slows down considerably. As a result, it bends toward the Earth. When the sun is low in the sky, it appears to be higher than it actually is because of this refraction. When it looks like the sun is about to drop below the horizon, it already has. The atmosphere is bending the light around the curve of the globe!

For much more information on mirages and other effects of refraction, check out the links on the next page.