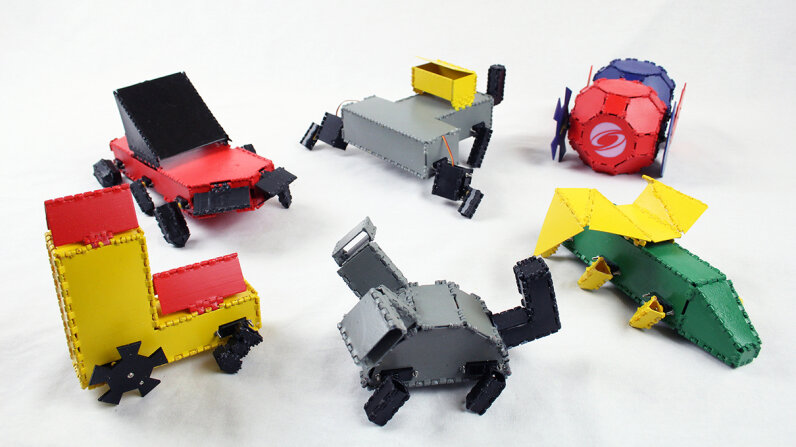 According to the International Federation of Robotics, more than 1.8 million industrial robots labored in factories around the world last year, and by 2019 the number could rise to nearly 2.6 million. Nevertheless, building and designing your own customized robot still seems pretty daunting — especially if you're not a robotics expert. Case in point: According to the Alaska Journal of Commerce, it took the owner of a Wasilla, Alaska-based janitorial company several years of hard work to create a vacuuming, mopping and sweeping robot that could help alleviate a manpower shortage.

But that difficulty in building customized automatons could change, thanks to a new breakthrough by researchers at Massachusetts Institute of Technology's Computer Science and Artificial Intelligence Laboratory (CSAIL). In a new article in the International Journal of Robotics Research, they detail a process that they call "Interactive Robogami," which allows nonroboticists to create new robot designs from a database of parts. After the system tests the design, the parts can be printed as relatively flat sheets using a 3-D printer and then folded — like origami, the Japanese art of folding paper to make objects, hence the name Robogami — to form functional automatons that can be assembled in as little as four hours.

One of Interactive Robogami's most intriguing features is that it allows designers to dictate not only a robot's shape but also how it moves. This MIT video explains the process:

The researchers also conducted a study of experimental users, which showed that the tool is "intuitive for novice designers and expressive enough to create a wide variety of ground robot designs," according to the article's abstract. As this MIT press release explains, the experimenters gave subjects 20 minutes of training, and then had them design a series of mobile robots. Each robot took 10 to 15 minutes to design, three to seven hours to print, and then between 30 and 90 minutes to assemble.

MIT doctoral student and co-lead author Adriana Schulz says via email that while previous efforts to enable nonexperts to build robots existed, Interactive Robogami represents a step forward. Previous tool systems forced robot-builders to consider the shape and movement of a robot in isolation from one another. "Our system combines geometry and motion," says Schulz, "allowing you to design objects that are physically capable of being fabricated while also being able to move and perform useful tasks."

Schulz says that Interactive Robogami still needs some additional development to improve it to the point where a nonrobotics expert can use it easily. Eventually, though, "our interest is very much to one day distribute the system, and for it to be used by not just designers and engineers," she says, "but by non-experts who want to design robots for everyday use. We hope this work will be a significant step toward democratizing the design and fabrication of robots. The goal is to enable people of all skill levels to make robots that can do personalized tasks, without having the years of experience robotics historically has required."

The researchers also plan to develop Interactive Robogami's capabilities, so that users can go into the system and define the behavior of the robot, in terms of the tasks it can handle.

"In the current system, users can create ground robots with desired capabilities by composing parts — both geometry and motion — from a database," Schulz explains. "The tool allows users to focus on conceptual design, while the system takes care of the implementation details required for fabrication. In the future we would like to extend this approach to handle more functionality in addition to ground locomotion and to allow automatic design from high level functional specifications."